Tea consumption has been around since as early as 1500 BC, originating as a medicinal beverage in the Yunnan province of China, also known as the birthplace of tea. Tea is produced using the leaves of the Camellia sinensis plant and the harvesting process has a significant impact on the resulting product. There are thousands of varieties of tea, the four main types being black, green, white, and oolong, all of which are produced from the same plant. China has, by far, the largest tea market worldwide, valued at over 78 billion U.S. dollars. Brazil and India rank in distant second and third places.
China is the top global tea producer, producing an annual volume of nearly 2.8 million metric tons in recent years. The British introduced tea consumption and production to India in the early 1800s, in order to create a competing market for China. India is the second largest producer of tea worldwide, followed by Kenya, Sri Lanka, and Indonesia. Sustainable farming practices within tea production have become more important in recent years; the estimated global production of UTZ certified tea has increased by almost 90 percent since 2012, although 2020 saw a significant decline.

Ready-to-drink (RTD) tea is a segment of the market which is set to experience strong growth in the future; the RTD tea market is forecast to reach almost 30 billion U.S. dollars worldwide by 2024. RTD tea beverages can be still or sparkling, and with additional flavorings. In terms of volume sales, ready-to-drink tea was one of the top-selling liquid refreshment beverages worldwide. Some niche categories also exist within the market, including healthier options. The size of the kombucha market worldwide, a fermented tea beverage consumed for its health benefits, is also estimated to grow in coming years.
This text provides general information. Statista assumes no liability for the information given being complete or correct. Due to varying update cycles, statistics can display more up-to-date data than referenced in the text.
Published by M. Ridder, Jan 12, 2022

Revenue of the tea market worldwide by country 2020

Country with the highest per capita tea consumption
Turkey

Global per capita tea consumption as of 2016, by country 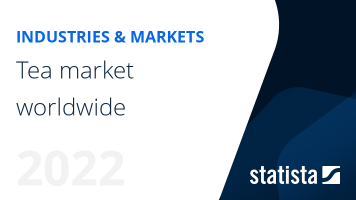 The most important key figures provide you with a compact summary of the topic of "Tea market worldwide" and take you straight to the corresponding statistics.