Published by
M. Shahbandeh,
Jan 16, 2019
The thought of eating insects often provokes revulsion among people who come from Western cultures, but the fact is that millions of people from around the world have relied on insects as an essential source of nourishment for thousands of years. Insects are high in protein, easy to cultivate, have a low carbon footprint, and could be instrumental in alleviating world hunger and climate change. The Food and Agriculture Organization of the United Nations has endorsed edible insects and encouraged their adoption in the diets of people all around the world. The global market value of edible insects is expected to grow from about 406 million U.S. dollars in 2018 to over 1.18 billion U.S. dollars by 2023. In that time period, the North American market is expected to grow by 28 percent, more than any other world region.
The edible insects market in the United States has shown promising growth in recent years, increasing from six million dollars to about eight million dollars between 2017 and 2018. Although one would be hard pressed to find edible insects in the vast majority of U.S. grocery stores, this is expected to change in the coming years. The market for flour, protein bars, and snacks made from insects is projected to reach 50 million dollars by 2023.

In the United States, attitudes are surprisingly positive in regards to willingness to try edible insects. A 2018 survey found that 72 percent of Americans would probably or definitely eat insects in the future. Among these adventurous diners, 22 percent would prefer to consume their edible insects in the form of a snack, while 5 percent would prefer to eat whole insects as a main entrée, without any effort to disguise their true nature.

In the following 4 chapters, you will quickly find the 18 most important statistics relating to "Edible Insects". 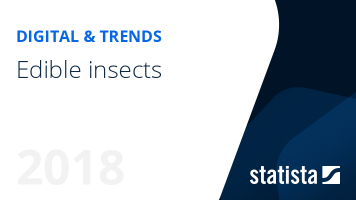 The most important key figures provide you with a compact summary of the topic of "Edible Insects" and take you straight to the corresponding statistics. 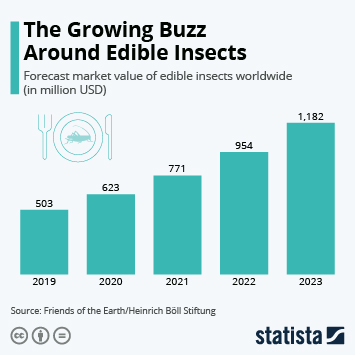 The Growing Buzz Around Edible Insects 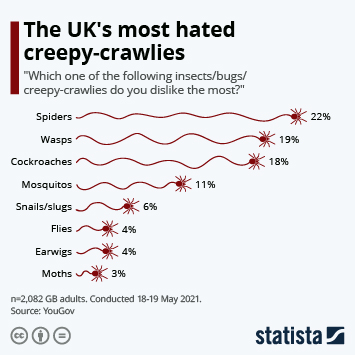 The UK's most hated creepy-crawlies