Meat consumption and vegetarianism in Europe - Statistics and Facts

Meat has been the staple protein in our diets for centuries. Yet with the world's population expected to reach at least nine billion people by 2050, future demand for food will likely outpace production if rates of output remain continuous, according to the Global Harvest Initiative. Such a trend is further exacerbated by differences in income: an ever-growing middle class is creating demand for a high-quality diet, while a significantly larger portion of the world are dealing with extreme malnutrition, either due to starvation or unhealthy 'modern' diets.
At present, levels of agricultural production in the developed world are at all-time highs, largely due to intensive farming practices and a demand-driven attitude, resulting in a shift to providing food at the lowest possible prices. Overproduction also results in waste, with self-sufficiency rates for pork exceeding demand in a number of countries while others increasingly rely on imports. Conversely, however, food prices have become more volatile and levels of inflation are reaching record heights as food supplies begin to tighten and less land becomes available. Meat itself is one of the most resource-guzzling categories of agriculture, taking up huge amounts of land, water and feed, in addition to producing approximately 14.5 percent of human-induced greenhouse emissions.

Consequently, consumer attitudes to meat are changing: there has been a rise in the number of vegetarians, vegans and flexitarians, with more people now opting for meat-free days. Not only is the environmental element of current meat production a factor, but more personal reasons also play a role, such as the World Health Organization's report on processed meat as possibly carcinogenic, concerns about animal welfare and rising levels of antimicrobial resistance in meat.

The meat-free market, as a result, is growing exponentially, with sales of meat substitutes in Germany expected to reach 255.6 million US Dollars by 2020. Germany has one of the largest populations that class themselves as vegan, vegetarian or flexitarian, with numbers still growing and similar trends being seen across Europe. Meat substitutes and alternatives encompass an increasingly broad range of products, with plant-based ingredients the most popular. Several German meat companies have even gone so far as to lead innovation and new product development for meat substitutes, marketed towards the general public rather than vegetarians to counteract predicted shifts in diet.
This text provides general information. Statista assumes no liability for the information given being complete or correct. Due to varying update cycles, statistics can display more up-to-date data than referenced in the text.

Consumers avoiding food ingredients or attributes in Europe in 2016

Share of consumers eating more vegetarian food in Europe in 2016

Vegetarianism and veganism among young adults in selected European countries 2022 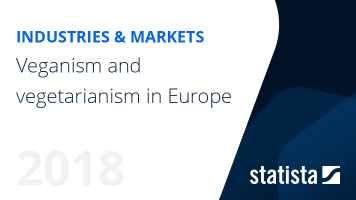 Go to report Veganism and vegetarianism in Europe
Top Seller

The most important key figures provide you with a compact summary of the topic of "Meat consumption and vegetarianism in Europe" and take you straight to the corresponding statistics.