The sustainable food movement has gained some traction in recent years, swept along with the popularity of the local food and organic food movements, though perhaps lesser known. Definitions of sustainable food can vary, but it generally refers to food that is produced using methods that protect the environment and the welfare of the people producing them. This definition can extend to seafood and other animal products as well. The global market value of ethically labeled packaged foods is projected to grow to from 793.3 billion U.S. dollars in 2015 to 872.7 billion U.S. dollars by 2020. In the United States, the retail value of products with an ethical label is also expected to grow in the next few years, but not significantly.
Fair trade products have grown increasingly more popular in recent years. In the early 2000s it was uncommon to see anything other than fair trade coffee or tea, but the market has since expanded to include fair trade sugar, honey, wine, apparel, coconuts, and seafood to name a few. UTZ, an organization that certifies products as sustainably farmed, reported that the global production value for sustainably produced cocoa grew from 920,000 metric tons in 2015 to around 1.3 million metric tons in 2019.

In terms of product segments, fruits and vegetables were the most-purchased sustainable/eco-friendly food and drink product in the U.S. in 2021. Coffee followed in close second place; around 21 percent of survey respondents had bought sustainable coffee in the last three months prior to the survey. The least popular categories to purchase sustainable food and drink products were ready-made-meals and spirits.

Survey figures show that consumer attitudes towards the trend are still quite mixed. Generation Z were the most likely generational cohort in the United States to be willing to spend more on food products which don't harm the environment. According to the survey carried out in 2019, almost two-thirds of Gen Z respondents were more likely to buy sustainable food. Just under one-third of Baby Boomers said the same.
This text provides general information. Statista assumes no liability for the information given being complete or correct. Due to varying update cycles, statistics can display more up-to-date data than referenced in the text.
Published by Statista Research Department, Nov 12, 2021

Importance of sustainable product labeling in purchase decision 2014, by region 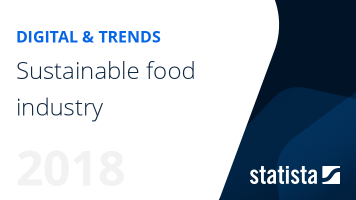 The most important key figures provide you with a compact summary of the topic of "Sustainable food industry " and take you straight to the corresponding statistics.