Published by
M. Shahbandeh,
Nov 17, 2022
The first evidence of dairy consumption dates back over six thousand years, and today dairy products are enjoyed all over the world. Over the past couple millennia there has been an incredible amount of creativity and innovation when it comes to processing, fermenting, and consuming dairy products. In 2021, the value of the dairy market worldwide was estimated to be about 871 billion U.S. dollars, which is projected to grow to 1,128 billion dollars by 2026.

In terms of production, the vast majority of dairy products are made with cow’s milk. India tops the list with the most number of milk cows of any country, at 58 million cows, while the leading producer of cow milk in the world is Europe, followed by the United States and India. Although East Asian countries do not have a long history of milk consumption, in recent years China has increased its domestic milk production volume by six million in the last ten years.

One of the many consequences of globalization is that dairy products are now consumed all across the world, and every year massive quantities of milk and cheese and other dairy products are traded between countries. In 2021, over 63 billion U.S. dollars worth of dairy products were exported, a significant increase from about 39 billion dollars in 2015. The European Union, with countries like France, Ireland, and Germany which are renowned for their cheese and butter, controls a 38 percent share of the global dairy product export market, the largest of any world region. Germany alone exports about 4.8 billion dollars worth of cheese in a year.

As charming as they were, the days of small family owned dairy farms are long gone, and now enormous corporations such as Dairy Farmers of America and Fonterra control significant shares of the global dairy market. Nestlé Group, one of the largest food and drink companies in the world, earned about 11 billion Swiss francs from milk product sales in 2021, making dairy the fourth largest product category for the multinational giant.

In the following 4 chapters, you will quickly find the 28 most important statistics relating to "Dairy industry worldwide". 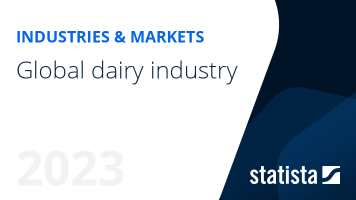 The most important key figures provide you with a compact summary of the topic of "Dairy industry worldwide" and take you straight to the corresponding statistics. 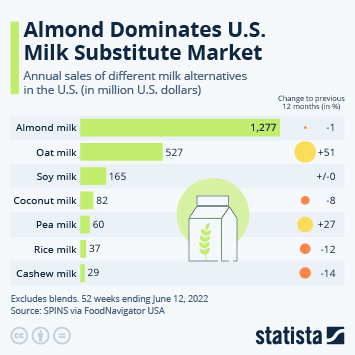 sales of alternative to dairy products