Published by Statista Research Department, Nov 17, 2022
Ever since the organic food movement took off, organic dairy has experienced widespread demand worldwide. Conventional factory farming methods involve giving dairy cows feed that is not part of their natural diet, keeping the livestock in cramped and squalid conditions, and treating them with growth hormones. The answer to this has been organic dairy farms, which typically allow their cows to graze, do not use growth hormones or antibiotics on their livestock, and commit to treating the animals humanely. The global market value of the organic dairy products was about 22 billion U.S. dollars in 2021 and is projected to grow to 34.8 billion dollars by 2027. The organic food market in the U.S. has been steadily increasing for the past 15 years and had over 57 billion U.S. dollars in sales in 2021.

In the United States, the organic dairy market generated about 4.9 billion dollars in revenue in 2021.From January to November that year, total organic milk sales in the United States amounted to about 2.56 billion pounds and total fat reduced milk was the most commonly sold milk. The average price for a half a gallon of organic milk in 2021 was just under four dollars, more than one dollar cheaper than the cost of 16 ounces of organic butter. Organic butter also saw a large decrease in sales that year, while sales of organic yogurt increased

In the following 4 chapters, you will quickly find the 21 most important statistics relating to "Organic dairy market in the U.S.". 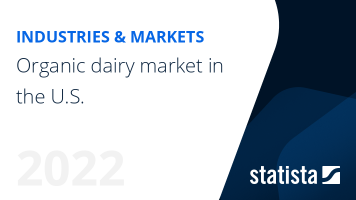 The most important key figures provide you with a compact summary of the topic of "Organic dairy market in the U.S." and take you straight to the corresponding statistics.