Published by
Yihan Ma,
Apr 15, 2021
China has become the world’s second-largest non-alcoholic beverage market in terms of revenue, owing to its vast population. Non-alcoholic beverages, also referred to as liquid refreshment beverages (LRBs), covers a wide range of products, including bottled water, carbonated soft drinks, juices, and more. In China, the term often refers to prepackaged drinks with an ethanol content of less than 0.5 percent. In 2020, China produced over 160 million metric tons of beverages, most of which was consumed in the domestic market. Bottled water, ready-to-drink (RTD) tea, and juices are China’s largest non-alcoholic beverage categories, based on the share of retail sales.

China is one of the leading retail markets for bottled water. On average, Chinese consumers drank 71.5 liters of bottled water per person in 2020, above the global average of about 60 liters per capita. Meanwhile, the Chinese bottled water industry has recorded a CAGR of nearly 10 percent in past years, second only to Indonesia. The fast-expanding industry is also highly concentrated, with the top five players accounting for more than half of the market share.
However, Chinese consumers showed less interest in soft drinks. China generated revenue of merely 35 billion U.S. dollars from its soft drink market in 2019, roughly 20 billion U.S. dollars less than its close neighbor, Japan. When it comes to per capita consumption, China ranked sixth among the ten most populated countries.

Lower sugar for the health conscious

The tepid soft drink market in China may be due to rising health consciousness. While the incidence of diabetes and overweight increased over time, a trend encouraging people to eat a balanced diet spread throughout the nation. In a survey conducted in 2020, more than 80 percent of Chinese respondents said they prefer sugar-free drinks to sugar-sweetened beverages. Furthermore, functional beverages have gained increasing popularity among Chinese consumers as well.

In the following 5 chapters, you will quickly find the 25 most important statistics relating to "Non-alcoholic beverages in China". 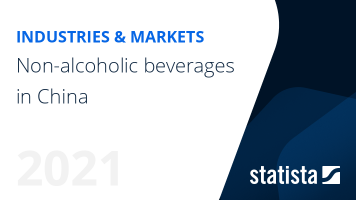 The most important key figures provide you with a compact summary of the topic of "Non-alcoholic beverages in China" and take you straight to the corresponding statistics.