Published by Statista Research Department, Aug 26, 2022
The Indian textile industry is one of the most distinctive in the world because of it’s ancient techniques and cultural traditions. In the vastness of India, it is but natural that its different parts, in addition to having their own unique cultures and languages, also have a variety in clothing. From the warm Pashmina wool to the fine embroidery of the Chikankari in the northern parts to the bright and colorful Bandhani and the regal Chanderi from the geographical west and center respectively; and southwards to hand-woven Sambalpuri and block printed Kalamkari make up the fabrics of Indian clothing. Hence, the three trillion U.S. dollars Indian apparel market is one of the leading apparel markets globally. Moreover, with the rise of urbanization and the country adopting western values at an increasing pace, the fashion and apparel industries are on the wheel of adaptation.

India is one of the world's leading producers of jute and cotton. 95% of the hand-woven fabric in the world is from India, which is also the world's second-largest producer of silk. The traditional handloom, handicrafts, wool, and silk items, as well as the organized textile industry, make up a large portion of the widely varied Indian textile and apparel market. Most of the textile and apparel are produced in Andhra Pradesh, Telangana, Haryana, Jharkhand, and Gujarat. The leading textile manufacturing companies are Page Industries, KPR Mill, and Trident. These companies manufacture a variety of products such as casual wear, sportswear, formals, denim, woven, and knits. In addition, the industry generates a wide range of goods and employs a significant number of people. About 100 million people are employed by these industries.

India exports textiles and clothing, including handlooms and handicrafts, to more than 100 nations worldwide. India’s apparel export makes up a significant portion of its total export and are essential to the country’s economy. However, there has been a slowdown in the export of apparel in recent years, particularly due to growing competition from nations like Bangladesh and Vietnam. Despite this, the export value of apparel was worth about 14 billion U.S. dollars in the fiscal year 2022. The leading export destination for Indian textile and apparel products was the United States with a 27 percent share of the total exports, followed by the European Union with 18 percent of the export share. In addition, with 39 percent of the overall exports for the textile and apparel industry, cotton textiles are a key contributor, while ready-made garments made up 36 percent, man-made textiles 14 percent, and handicrafts made up five percent of the sector's total exports.

In the following 6 chapters, you will quickly find the 34 most important statistics relating to "Apparel market in India". 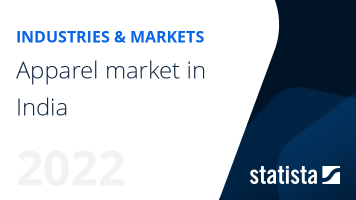 The most important key figures provide you with a compact summary of the topic of "Apparel market in India" and take you straight to the corresponding statistics.