Honey market worldwide and in the U.S. - statistics & facts

The honey bee is one of the most important insects for humankind. Very few other species are as mutually beneficial to each other as humans and honey bees. Many of our favorite fruits and vegetables are pollinated by bees, and we in turn plant the crops that allow the bees to produce their main food source, honey. In 2020, there were about 94 million beehives in the world, up from about 80 million beehives in 2010. The global production volume of honey peaked in 2017 at about 1.88 million metric tons and has since decreased to about 1.77 million metric tons. The global honey market was valued at just over about eight billion U.S. dollars in 2020.

As of 2020, India is the country with the highest number of beehives, at around 12.2 million, followed by mainland China and Turkey. In comparison, the United States only has about 2.7 million beehives. Despite the huge number of hives in India, China outstrips India in terms of production volume, producing about 458,000 metric tons of honey in that same year. Turkey, the next leading producer, produced only about a quarter of that volume

The value of honey production in the United States has seen some wide fluctuations since 2000 but has an overall positive trend. North Dakota is by far the top honey producing state, producing around 28 million pounds of honey in 2021, more than twice as much as the runner up, South Dakota. However, South Dakota had the largest stock of honey of any U.S. state in that year. In 2021, the average price of honey in the U.S. was 2.54 U.S. dollars per pound, up from up 2.1 U.S. dollars per pound in the previous year.
This text provides general information. Statista assumes no liability for the information given being complete or correct. Due to varying update cycles, statistics can display more up-to-date data than referenced in the text. 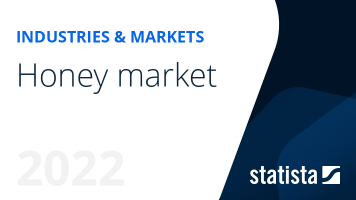 Go to report Honey market worldwide and in the U.S.
Top Seller

The most important key figures provide you with a compact summary of the topic of "Honey market worldwide " and take you straight to the corresponding statistics.