Wine is an important commodity in Argentina. The country is among the leading wine producers worldwide and the alcoholic beverage is also part of Argentinian culture, bringing family and friends together around the dinner table. Influenced by the presence of Southern Europeans, the Argentinian government at the time of Italian immigration, during the 19th and 20th centuries, encouraged the cultivation of vineyards and the elaboration of grape products. Indeed, the variety of climate, terrain, sunshine and good quality soil in the country were favorable for vine crops.
Wine production in Argentina surpassed 8.4 million hectoliters in 2018, and, although experiencing a decreased production since 2015, forecasts are still promising. In 2017 and 2018, Argentina was the major producer of the fermented beverage in Latin America, followed by Chile and Brazil. The vineyard surface area in Argentina amounted to around 218 thousand hectares in 2018. The Mendoza region accounts for most of the grape crops and wine production.

Regarding types of wine, the most produced ones based on crop surface area in 2018 were the red varietals, specifically Malbec, Bonarda and Cabernet Sauvignon. The production of white varietals that year, on the other hand, was not as significant. The most produced white wines in Argentina are Torrontés, Chardonnay and Sauvignon Blanc.

Argentina is not only one of the main producers of the alcoholic drink, but one of the largest exporters and consumers as well. Worldwide, the South American country supplies the alcoholic beverage to dinner tables in countries such as the U.S., the United Kingdom, Spain and Canada. Exporting is a priority for the wine industry in Argentina, yet most of the production is consumed by the domestic market.

When it comes to consumption, Argentinian respondents said they usually drank two glasses of wine during the weekend. However, data on per capita consumption showed that wine consumption averaged at almost 18.86 liters per person in 2018. In 2017, 19 to 35 year olds were the largest consumers of wine.
This text provides general information. Statista assumes no liability for the information given being complete or correct. Due to varying update cycles, statistics can display more up-to-date data than referenced in the text.

Global leading countries in wine export 2021, based on volume 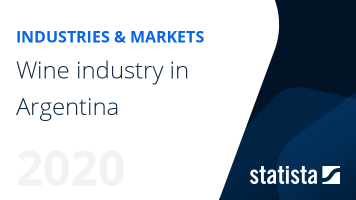 The most important key figures provide you with a compact summary of the topic of "Wine industry in Argentina" and take you straight to the corresponding statistics.