The beer industry in Mexico was greatly influenced by German and Austrian immigrants who founded the first breweries during the late 19th century. For Mexicans, beer is a social drink to be enjoyed mostly but not exclusively during soccer games and friends’ gatherings. With an estimated average revenue per capita of close to 176 U.S. dollars in 2019, beer market profits in Mexico attained a value of approximately 22 billion dollars that year. Considering that figure, the Mexican market was estimated to be one of the 10 leading beer markets in the world.

A beverage appreciated locally and internationally

The beer industry is one of the most important beverage subsectors in Mexico. The country ranked as the third producer of beer in the Americas in 2019, only behind the United States and Brazil. Moreover, the industry's production value has been constantly increasing in recent years. In 2019, Mexico produced nearly 185 billion Mexican pesos worth of beer, approximately 137 percent more than the value reported in 2013. Regular beer was the segment with the largest market share in 2020, accounting for more than half of its sales. Meanwhile, light and dark beer accounted for 21 percent and 16 percent of Mexico's beer market, respectively. According to a 2020 survey, in comparison to other alcoholic beverages, beer was by far the most consumed drink, with four out of every ten respondents stating they enjoy drinking it frequently.

Mexican beers are also widely recognized and appreciated all over the world. In fact, Mexico manufactures one of the top-selling beer brands in Latin America and globally, Corona. As a result, the country is a net exporter of the product. In 2019, exports of malt beer from Mexico exceeded its imports by 4.45 billion U.S. dollars. Moreover, beer exports from the country have been constantly increasing in recent years. Most of which have the United States as its destination. Mexico's northern neighbor received approximately 87 percent of the country's beer exports in 2019.

Already before the beginning of the COVID-19 pandemic and the confinement that followed, the per capita consumption of beer enjoyed at home in Mexico by far exceeded that of the out-of-home market. While in 2019, a person drank on average close to 52 liters of beer at home or in personal parties or gatherings, per capita consumption of out-of-home beer amounted to 14.5 liters. Accordingly, beer enjoyed in restaurants and bars is more expensive. In that year, the difference between the price per unit of beer consumed at home and the one consumed out-of-home was equal to 0.87 U.S. dollars.
This text provides general information. Statista assumes no liability for the information given being complete or correct. Due to varying update cycles, statistics can display more up-to-date data than referenced in the text.

Establishments in the beer manufacturing industry
19

Mexico: consumption per capita of the beer market 2018-2025, by sales channel 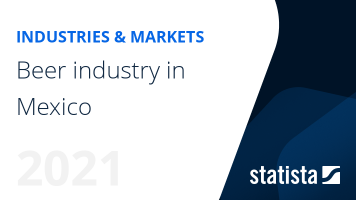 The most important key figures provide you with a compact summary of the topic of "Beer industry in Mexico" and take you straight to the corresponding statistics.