Brazil is one of the most promising emerging markets in the wine industry worldwide. The largest economy in Latin America has an estimated total population of over 210 million inhabitants, of which 150 million are over the age of 20, therefore, legally allowed to drink alcoholic beverages. In 2020, around 39 million consumers in Brazil drank wine at least once per month.

How does the Brazilian wine market compare?

Wine production in Brazil reached 1.9 million hectoliters in 2020, the lowest output since 2016. Still, Brazil is the third largest producer of wine in Latin America, after Argentina and Chile. Wineries in Brazil mainly produce table wine as opposed to fine wine, which is obtained from the grape species Vitis vinifera.

Unlike production, wine consumption in Brazil is on the rise, with demand expected to near 400 million liters annually by 2024. Per capita consumption surpasses two liters per person per year since 2019 but still lags behind that of ‘old world’ wine countries, or neighboring wine markets Argentina and Chile.

Internationally, the most highly praised Brazilian wines, usually considered the country’s ‘signature’ wines, are within the sparkling or semi-sparkling category. One of the most famous Brazilian varietals is Moscato, also known as Muscat in English speaking countries.

The South leads in wine production and trade

Rio Grande do Sul is, by far, the largest wine producing and exporting state in the country. The majority of Brazilian wine exports are destined to the neighboring Paraguay, which accounts for almost half the total value of wine exported from Brazil. The U.S. is another important market of destination, accounting for over 27 percent of exports.

It is estimated that around two thirds of the wine sold in Brazil is produced domestically, whereas the remainder share comes from foreign wine producing nations. The largest share of imported wines in Brazil originates in Chile (over 42 percent), while around 16 percent comes from Argentina and Portugal, each. These imports are mainly destined to the southern states of Santa Catarina and São Paulo. The latter's homonymous capital city is considered the country’s culinary center and home to the most acclaimed Brazilian restaurants.
This text provides general information. Statista assumes no liability for the information given being complete or correct. Due to varying update cycles, statistics can display more up-to-date data than referenced in the text.
Published by Emma Bedford, Nov 24, 2022 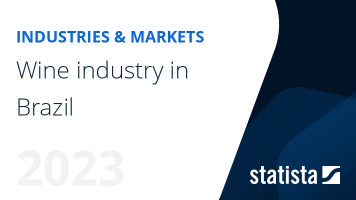 The most important key figures provide you with a compact summary of the topic of "Wine industry in Brazil" and take you straight to the corresponding statistics.