Published by
Eloise Trenda,
Jan 24, 2022
Whether it is Mexican tequila, Brazilian cachaça, or Patagonian wine, Latin American alcoholic beverages have become internationally renowned for their quality and taste. Within the region, these kinds of drinks are widely consumed. In fact, Brazil and Mexico rank among the leading alcohol consumers in the world, and along with Argentina are expected to be part of the ten largest alcohol markets by 2027. When it comes to per capita values, however, the country with the highest level of consumption in the region is Uruguay, with a total of nearly 11 liters consumed per person every year.
The most popular alcoholic drink in Latin America is, by far, beer. Corona (Mexico), Skol (Brazil) and Águila (Colombia) are the most valuable beer brands in the region, and craft beer is becoming increasingly popular. The market value of Latin American craft beer surpassed the 12 billion U.S. dollars in 2018 and is expected to keep growing. In Brazil, for instance, the craft beer industry is estimated to account for nine percent of the market by 2022, in comparison to 2016 when it represented only less than one percent.

The Brazilian beer industry is the largest in Latin America, with a market size of over 12 billion liters in 2017. In addition, Brazilians are the heaviest beer consumers in the region. In 2018, they drank on average 65 liters of beer per person. However, enjoying a beer at a bar in Brazil can be relatively expensive in comparison to other Latin American countries. Rio de Janeiro, for instance, has the second highest price for a beer at a bar among other large cities in the region, only surpassed by that of Buenos Aires, capital of Argentina, where ordering a beer can cost up to eight U.S. dollars.

Wine is another alcoholic beverage widely consumed in South America. Argentina and Chile are the biggest producers, and are worldwide recognized as ‘new world’ wine regions. Argentinian wine is mainly produced in the province of Mendoza, specially the red varietal Malbec, which is globally known as Argentina’s signature wine. In Chile, some of the most grown red varietals include Cabernet Sauvignon and Carménère. Chilean white wines are also worldly acclaimed, with Sauvignon Blanc and Chardonnay being some of the favorites among wine connoisseurs.

Despite the popularity of beer and wine, and given the cultural diversity of the region, what particularly shapes the alcoholic beverages market in Latin America is its variety of local liqueurs and spirits. Some of the best-known typically Latin American alcoholic drinks include aguardiente colombiano, cachaça, pisco, rum, mezcal and tequila. These beverages are produced based on a variety of local ingredients such as sugar cane (cachaça and rum), agave (mezcal and tequila), anise (Colombian aguardiente) and grape (pisco). While most are native to specific Latin American countries such as Brazil (cachaça), Colombia (aguardiente), Mexico (mezcal and tequila), Chile and Peru (Pisco), others are distinctive of the region on account of its global popularity. Rum, for instance, though produced in different areas in Latin America and the Caribbean, is mainly known as a typically Cuban distillate. Another beverage widely consumed in South America is fernet, a bitter herbal liqueur native to Italy. Particularly in Argentina and Uruguay, it is usually prepared as a cocktail mixed with Coca-Cola.

In the following 5 chapters, you will quickly find the 26 most important statistics relating to "Alcoholic beverages in Latin America". 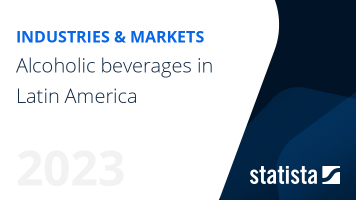 The most important key figures provide you with a compact summary of the topic of "Alcoholic beverages in Latin America" and take you straight to the corresponding statistics.

Tequila and Mezcal in Mexico