Published by
Eloise Trenda,
Sep 28, 2022
Corona Extra, Micheladas, and Margaritas all have something in common other than lime – they incorporate and represent pieces of Mexican culture in the form of alcoholic drinks. Internationally known for its beer brands and agave-based distillates, the country’s alcoholic beverages industry expands beyond its borders. What is more, the local market increases its revenue every year, and is considered one of the fastest growing alcoholic drinks markets in Latin America and the world. By 2027, it is estimated that Mexico will be among the ten most valued alcoholic beverages markets globally.

Which alcoholic drink do Mexicans consume the most?

In Mexico, the most consumed alcoholic beverage is beer. According to a survey carried out in 2020, approximately four out of ten adult respondents stated consuming beer regularly. Wine, on the other hand, was consumed frequently by close to a third of Mexicans. Meanwhile, for spirits such as rum, tequila or whisky, the figure dropped down to 23 percent.

As for how Mexicans enjoy and purchase their drinks, 80 percent of the industry’s revenue can be attributed to at-home consumption of alcoholic beverages, while only 20 percent stems from out-of-home drinking, like bars and restaurants. Moreover, most revenue derives from off-line sales. However, considering the impact of the COVID-19 pandemic, the share of proceeds from online purchases was estimated to slightly increase in the following years.

Beer brand as leader in the Mexican market

Corona Extra is not only the main alcoholic drinks brand in the country. The beverage produced by Grupo Modelo is also the most valued local brand throughout all Mexican industries, and one of the top brands in Latin America. With an estimated value of approximately 7.5 billion U.S dollars in 2020, the company’s figure is only surpassed in the region by that of Brazilian financial services and bank brands Bradesco and Itaú. In fact, it is not only in terms of revenue that the company shines. On Twitter, the official profile of Corona MX was followed by more than 532 thousand accounts. That is more than double the amount of Victoria’s profile, the second most followed Mexican beer brand .

In the following 6 chapters, you will quickly find the 29 most important statistics relating to "Alcoholic beverages in Mexico ". 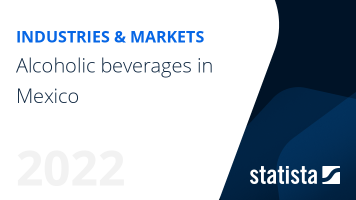 The most important key figures provide you with a compact summary of the topic of "Alcoholic beverages in Mexico " and take you straight to the corresponding statistics.

Tequila and Mezcal in Mexico