Canada is home to a large apparel market and some of the most popular apparel brands worldwide, such as Lululemon Athletica and Canada Goose. In 2021, the sales value of the Canadian apparel market was forecast to amount to approximately 26.4 billion Canadian dollars, a figure which is expected to reach around 28.5 billion dollars by 2024. As of 2020, the leading apparel retailers in Canada were Winners, Walmart, and Mark's. Among Canadian households, the average expenditure on clothing and accessories has remained stable in the past couple years at around 3,300 to 3,500 Canadian dollars annually.

The domestic textile, clothing, and leather product manufacturing industry in Canada has fluctuated in size since 2012, perhaps following the common trend of many developed countries of outsourcing manufacturing to developing countries, to keep costs low. The value of apparel imported to Canada increased from around nine billion Canadian dollars in 2011 to nearly 14.4 billion Canadian dollars in 2019. In 2020, this figure dropped due to the impact of the coronavirus pandemic on trade, falling to roughly 12 billion dollars.

H&M is a Swedish clothing retailer that has become increasingly popular in Canada, generating revenues of almost 652 million Canadian dollars in 2020, up from around 300 million in 2010. In Ontario alone, there were 43 H&M stores, more than any other Canadian province. Although Reitmans, one of the most popular clothing retailers in Canada, is the second largest women's apparel chain, its store count has seen a sharp decrease in the past years, from nearly 1,000 locations in 2011 to 415 in 2021.
This text provides general information. Statista assumes no liability for the information given being complete or correct. Due to varying update cycles, statistics can display more up-to-date data than referenced in the text.
P. Smith
Research expert covering apparel industry and general merchandise
Get in touch with us now
Published by P. Smith, Mar 10, 2022

Dollar share of Winners in the Canadian apparel market
6.8%

Annual household expenditure on clothing and accessories in Canada 2010-2019

Change in retail sales of clothing stores in Canada 2012-2021

Forecast sales value of the apparel market in Canada 2020-2024

Annual household expenditure on clothing and accessories in Canada 2010-2019 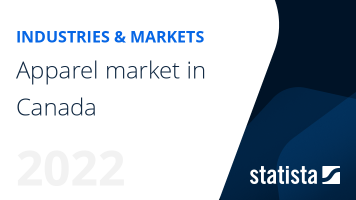 The most important key figures provide you with a compact summary of the topic of "Apparel market in Canada" and take you straight to the corresponding statistics.