Published by
Madhumitha Jaganmohan,
May 23, 2022
The first demonstration of electric light in India was conducted in Kolkata (then Calcutta) mid-1879 during British colonization of the sub-continent. A few decades later, the success of the demo was extended to Mumbai (then Bombay) to set up a generating station to power a tramway in 1905. Over the century, hydroelectric installations were set up in Darjeeling tea estates, street lights were lit in Bengaluru, and the first electric train ran between Bombay’s Victoria Terminus and Kurla. In 2015, Cochin International Airport became the world’s first fully solar powered airport with a dedicated solar plant.

When did India get electricity?

India began using regional, state-based grid management systems for electricity in the 1960s. The project to connect a national grid started in the 1990s and in December 2013, after establishing regional connections among the five grid systems, the country has had a national grid. Coal is the most used fuel source for this sector, while renewables are slowly but surely growing to occupy larger market positions. In 2017, India became a first-time exporter of electricity supplying over 5.7 thousand GWh to its neighbors, against an import of about 5.5 thousand GWh.

The socio-economic growth of the largest democracy in the world seems to be directly proportional to its installation, demand and consumption of electricity. As of 2020, the electricity consumption per capita was 1.2 kWh. The maximum energy-intensive sector was the industrial sector accounting for about 42 per cent of the total energy consumption in fiscal year 2020.

How much of India is electrified?

While there is affordability of power and a steady industry growth, power reserves fail to reach all the nooks and corners of a vast India. As per the 2011 census, only 55.3 percent of rural households used electricity as a light source. In contrast, this was 92.7 percent in urban areas.

The general elections of 2014 elected Narendra Modi of the Bhartiya Janta Party, who promised to electrify all Indian homes during his term as prime minister. With the help of the Ministry of Power’s Deen Dayal Upadhyaya Gram Jyoti Yojana, it was announced in April 2018 that India had achieved 100 percent electrification of all rural and urban households. The government considers a village electrified when it has the basic infrastructure and when ten percent of its households and public places have power.

The World Bank estimated that over one billion people had no electricity, with India and Nigeria leading the list of most power-deficient countries. As Asia’s third-largest economy, one of the many things holding the country back is its power shortage. Electricity blackouts continue to be a pressing issue across all regions in the country that need to be mitigated.

In the following 5 chapters, you will quickly find the 23 most important statistics relating to "Electricity in India".

The most important key figures provide you with a compact summary of the topic of "Electricity in India" and take you straight to the corresponding statistics. 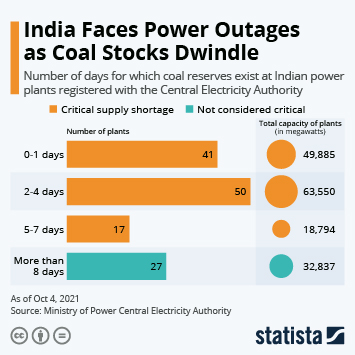