Some of the leading players in the U.S. fitness equipment market are the Brunswick Corporation, Amer Sports, and Nautilus Inc. The fitness segment of the Brunswick Corporation generated approximately 1.04 billion U.S. dollars in revenue in 2018. Nautilus Inc. attributes the majority of their sales to cardio products such as treadmills and elliptical machines, rather than strength training products.

Among American consumers who purchased sporting equipment in the twelve months before August 2018, nearly 38 percent bought some kind of work-out equipment, such as weights, dumbbells, or training machines. Most of these consumers spent between 101 and 250 U.S. dollars on sporting equipment or gear in the past year, about 17.5 percent. Some 8.45 percent of U.S. consumers who bought sports equipment spent over 500 U.S. dollars on it. The most popular retail channel for fitness equipment and sporting goods are specialty shops such as Dick’s Sporting Goods or Foot Locker.

In the following 4 chapters, you will quickly find the {amountStatistics} most important statistics relating to "Fitness equipment in the U.S. ".

The most important key figures provide you with a compact summary of the topic of "Fitness equipment in the U.S. " and take you straight to the corresponding statistics. 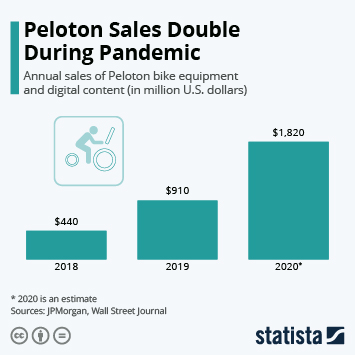