Published by
D. Tighe,
Oct 4, 2022
For Canadians, sports such as hockey and lacrosse are considered an intrinsic part of their culture. While some prefer to watch them, many individuals have grown up playing one or more sports, whether it was a team-based or individual activity. As such, the sporting goods industry in Canada is a rather large one, with a variety of sporting goods retailers located throughout the country. Such goods can include any item used for sporting activities or exercise; from training equipment and sports apparel to athletic shoes and protective gear.

In 2021, retail sales of sporting goods stores (alongside hobby, book, and music stores) increased considerably. While Canadian store sales had dropped below 12 billion Canadian dollars in 2020, they shot up in 2021, reaching an estimated 13.3 billion Canadian dollars. In 2022, as well as previous years, the majority of sporting and athletic goods manufacturing establishments were located in Ontario and Quebec, the most populated provinces in the country. Collectively, the two provinces accounted for 170 such establishments in that year. Overall, most sporting goods stores in Canada, e.g., golf equipment outlets and cycling supply stores, were typically located in either Quebec, Ontario, Alberta, or British Columbia.

With the increasing popularity of athleisure wear in Canada and other countries around the world, items such as exercise tights and sweatpants have been making a name for themselves as everyday clothing items. Canada just so happens to be home to one of the largest brands within the global sports apparel and athleisure market, namely lululemon. The company known as lululemon athletica inc. was founded in Vancouver, Canada, back in 1998, and started out selling up-market leggings and yoga clothing. Over the years, lululemon expanded its wardrobe and became an internationally recognized brand. Although the company’s Canadian revenue had continued to drop for several years until 2015, lululemon managed to turn itself around, generating nearly a billion U.S. dollars in revenue during its 2021 financial year.

In the following 5 chapters, you will quickly find the 36 most important statistics relating to "Sporting goods in Canada". 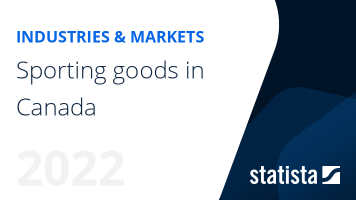 The most important key figures provide you with a compact summary of the topic of "Sporting goods in Canada" and take you straight to the corresponding statistics.