Published by
Madhumitha Jaganmohan,
Jan 5, 2022
The United States has one of the largest wind energy markets in the world. Wind power development in the country has been largely supported through a production tax credit which allows producers to be paid based on the amount of electricity they produce through wind sources. However, uncertainty about the market and the future of subsidies or other tax benefits may hinder market growth in coming years. Wind power is the largest renewable energy source in the U.S. (excluding hydroelectricity), accounting for 2.5 percent of energy consumption.

U.S. electricity generation from wind reached a peak of over 337 terawatt hours in 2020, with figures having grown steadily since the early 2000s. Following China, the U.S. is the leading country in new installed wind power. In 2020, the country added about 16.9 gigawatts to its wind farm fleets. Texas was the U.S. state with the greatest new capacity installations.

General Electric is the largest U.S.-based wind turbine manufacturer. In 2020, it made 15.6 billion U.S. dollars through its renewable energy business segment.

Despite the Department of Energy attributing it huge resource potential, the U.S. coast has been largely untapped for offshore wind deployment. To date, the country with a coastline of over 12,000 miles has only installed one commercial offshore wind park - Block Island Wind Farm, Rhode Island, with a capacity of 30 megawatts. However, this is looking to change in the future. As of September 2020, nine offshore projects were in pipeline for the Atlantic Coast and some of the country’s largest electric utilities such as Dominion Energy and Duke Energy have made offshore wind essential to their goals of reaching net-zero emissions.

In the following 6 chapters, you will quickly find the 28 most important statistics relating to "Wind power in the U.S.".

The most important key figures provide you with a compact summary of the topic of "Wind power in the U.S." and take you straight to the corresponding statistics. 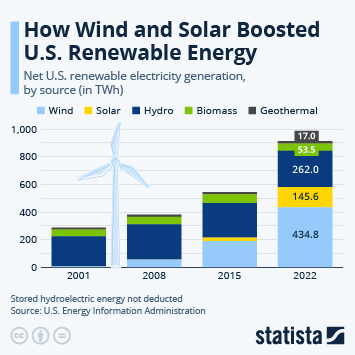