Latin America may be an emerging economy across numerous sectors, but within the mining industry, its significance has since long been established. With the first records of commercial exploitation of mineral resources in the region dating back to the early 16thCentury, under Spanish and Portuguese colonial rule, Latin American countries have since then climbed their way to the top ranks of global production for a variety of metals and minerals.

All that glitters is not gold… but it could be silver

Despite more than three centuries of heavy silver and gold extraction during European colonization, Latin America’s relevance in the global precious metals market has not waned. Currently, Peru is home to the world’s largest silver reserves, while Mexico, Chile, and Bolivia all rank among the top ten. These countries, along with Argentina, made the region responsible for more than half of silver produced worldwide in 2019. Peru and Mexico are also the leading gold producing nations in Latin America, with Brazil and Argentina trailing closely behind.

Regardless of its precious metals’ history, nowadays Latin America’s metal empire is built out of copper, with eight out of the ten leading mining companies in the region operating primarily in the production of this base metal. Chile, the largest copper producer, accounted for more than 28 percent of global production in 2020, with an output surpassing that of the following top three combined. The Chilean copper sector managed to survive the first year of the COVID-19 pandemic somewhat unfazed, with the annual production dropping by less than two percent, even amid lockdown measures and a decline in international demand. Meanwhile, neighboring Peru was hit hard by the coronavirus, with mines being shut down following the pandemic’s outbreak. In turn, the Peruvian annual copper production dropped by more than 12 percent in 2020, when compared to the previous year, dipping below 2016 output levels. Nevertheless, the Andean country still defended its position as global runner-up in copper production.

Still, Latin America’s mining success stems from more than a couple of metals. In terms of bauxite production, Brazil is the one that stands out in the global market, ranking amongst the top five. But Brazil's prominence in the mining sector lies in the ferrous industry. The country was the second largest iron ore mine producer in the world in 2020, with almost half a billion metric tons produced. The Latin American region has also kept up with the recent trends. Holding over 60 percent of global reserves, Chile and Argentina lead the region in terms of lithium production.
This text provides general information. Statista assumes no liability for the information given being complete or correct. Due to varying update cycles, statistics can display more up-to-date data than referenced in the text.

Bruna Alves
Research expert covering energy and environment
Get in touch with us now
Published by Bruna Alves, Aug 25, 2021

Leading mine producers in Latin America 2021, by selected metal or mineral

Leading mining and metallurgical companies in Brazil 2020, by revenue 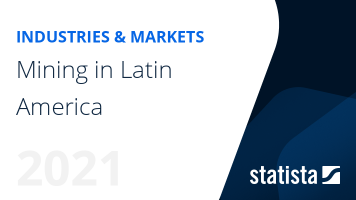 The most important key figures provide you with a compact summary of the topic of "Mining in Latin America" and take you straight to the corresponding statistics.