Mining is undoubtedly one of Mexico’s most important economic activities. A part of the country’s culture since pre-Colombian times, Mexican mining saw a new era of development begin during Spanish colonization, with a particular focus on precious metals exploration. Five centuries later, the country is amongst the top ten global producers of more than 15 metals and minerals. In 2020, the mining sector represented 1.3 percent of Mexico’s GDP and boasted a production value of more than 281 billion Mexican pesos – despite a drop in output – supported by a high in metal prices.

Since the early 1500s, the prospects of boundless riches in the form of gold and silver drove Spanish conquerors to Mexico. Fast forward to the 21st Century, and precious metals are still some of the most important commodities in the Mexican mining sector. Despite a mostly continual decrease in gold production reported in the second half of the decade, the metal nevertheless contributes with the largest share in Mexico’s mining production value. In 2020, it accounted for nearly one third of the nation’s output value. As global geopolitical tensions and uncertainties regarding economic development have led investors to search for more traditional and reliable investments, the industry worldwide has recently become more favorable, as the increase in demand led to a surge in gold prices.

Meanwhile, in spite of reporting almost half of the gold production value, silver mine production in Mexico remains a force to be reckoned with. In 2020, the Latin American country was the largest silver producer worldwide, supplying over 22 percent of the global production that year. Silver production is largely concentrated in the central state of Zacatecas, where three out of the five biggest silver mines in Mexico are located.

Base metals also claim their space

Although historically the North American country’s mining sector was developed with a focus in precious metals, nowadays Mexico also stands out as a base metals powerhouse in the global arena. Holding the world’s fifth largest reserves, copper production in Mexico has nearly tripled since the beginning of the decade, becoming the second most important metal in the country in terms of production value. Furthermore, the production of zinc and lead has also increased in the last decade, accounting for nearly 10 percent of the mining sector’s production value, combined.
This text provides general information. Statista assumes no liability for the information given being complete or correct. Due to varying update cycles, statistics can display more up-to-date data than referenced in the text.

Bruna Alves
Research expert covering energy and environment
Get in touch with us now
Published by Bruna Alves, Oct 1, 2021

Number of jobs in mining
368k

Gold production in Mexico 2020, by state

Silver production in Mexico 2020, by state 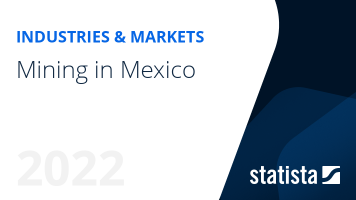 The most important key figures provide you with a compact summary of the topic of "Mining in Mexico" and take you straight to the corresponding statistics.