Indonesia has one of the highest smoking rates in the world, and is one of the biggest producers of tobacco worldwide. According to a survey on regular smokers in the archipelago, curiosity was the main reason why Indonesians tried smoking cigarettes for the first time, and most were between 16 to 18 years when they first started smoking.

Kretek - the Indonesian cigarette of choice

In 2021, approximately 236 thousand metric tons of tobacco were produced in Indonesia. In that same year, Indonesia imported tobacco from other major producers to fulfil the tobacco industry's need. Different than other countries, Indonesian smokers tend to favor the local kretek cigarettes. Kretek is a clove cigarette that consists of tobacco, ground clove buds, clove oil as well as other spices such as cumin, cinnamon, or nutmeg. Saccharin is then added to the kretek cigarette wrapping paper to give it a sweet taste. Machine made kretek had a share of around 75 percent of the Indonesian tobacco market, compared to the five percent for white cigarettes. Kretek cigarettes are, however, more harmful than regular cigarettes due to a higher percentage of tar and nicotine - the average kretek cigarette has 56 milligrams of tar and 2.8 milligrams of nicotine. A survey on the daily cigarette consumption in Indonesia found that 32 percent of respondents claimed to smoke between ten to 15 cigarettes a day, while ten percent said that they smoked more than 20 cigarettes per day.

Smoking - a habit that is here to stay?

In the last decade there had been some attempts to restrain smoking, such as an increase in government funding for medical research on the health impacts of smoking. However, the Indonesian government had always been supportive of the kretek industry and were slow to implement a functioning system of tobacco control and consumer protection as the tobacco industry is one of Indonesia's largest economic contributors. Cigarette costs and tax rates in Indonesia are known to be low in comparison to other countries. It is just recent that Indonesia increased its tobacco excise across all cigarette varieties by an average of 12 percent. However, this step was rather taken to generate additional revenues to help the nation stay afloat during the COVID-19 crisis and has not been effective to reduce Indonesia's tobacco consumption.

While tax revenue and price increases are important steps to ease the country's pressure, the Indonesian government also needs to focus on reducing its smoking prevalence. The fact that cheap cigarettes are a major contributor to Indonesia's tobacco epidemic must also be emphasized. A pack of cigarettes in Indonesia was around 14 thousand Indonesian rupiah for kretek cigarettes and 24 thousand rupiah for white cigarettes. There is still a long way to go before Indonesia's tobacco consumption is drastically reduced. Decreasing the price gap between the most and lowest priced cigarette products and enacting the highest legal tax rates seem to be the preferred recommendations by Indonesian health organizations.
This text provides general information. Statista assumes no liability for the information given being complete or correct. Due to varying update cycles, statistics can display more up-to-date data than referenced in the text.
Published by Hanadian Nurhayati-Wolff, Sep 19, 2022

GDP from manufacture of tobacco in Indonesia
135.15tr IDR

Annual expenditure on cigarettes and tobacco in Indonesia 2010-2019

Share of Indonesian population aged 15 years and above who smoked
28.96%

Production volume of tobacco in Indonesia 2012-2021 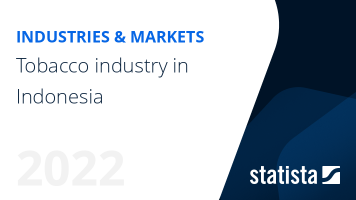 The most important key figures provide you with a compact summary of the topic of "Tobacco industry in Indonesia" and take you straight to the corresponding statistics.