Footwear industry in the United Kingdom (UK) - statistics and facts

Published by
P. Smith,
Sep 6, 2022
The footwear industry in the United Kingdom (UK) suffered during the coronavirus (COVID-19) pandemic, like many industries, but 2021 figures suggest a return to previous trends. Consumer spending on footwear, which had consistently grown up until 2019, before dipping in 2020, showed considerable recovery. In 2021, UK households spent approximately 10.95 billion British pounds on footwear which was only just shy of the 2019 peak. Footwear manufacturing also peaked in 2019. This is despite the fact that the numbers of both footwear manufacturing enterprises and retail stores specializing in footwear have fallen since 2008.

The UK footwear trade is characterized more by imports than exports. In 2021, the import value of footwear from countries outside the EU amounted to roughly 2 billion British pounds. China ranked as the main import partner for footwear to the UK, with a trade value of nearly 1.5 billion U.S. dollars that year. This marked the first year since 2018 that imports from outside the EU were worth more than footwear imports from within the EU, which saw a dramatic decrease of roughly one billion dollars from 2020 to 2021. The EU does, however, remain the the leading destination for UK footwear exports, although the margins decreased significantly in 2021.

For UK footwear retail, 2021 showed recovery from the difficult preceding year as lockdowns ended and consumers returned to stores. Footwear and leather goods sales increased, both in terms of sales value and quantity bought, by about 10 percent each. The index number of footwear sales per week in the UK had decreased significantly in 2020 and dropped to an index point of around 73. In 2021 this grew to 80, although that is still much lower than the level in pre-pandemic years.

Some of the most popular footwear fashion brands in the UK include Dr. Martens, Hunter Boots, and Clarks. The iconic British brand Dr. Martens, also active in markets outside the UK, has seen its worldwide sales skyrocket to over 900 million British pounds in the financial year 2022, roughly double the revenue from the financial year 2019. The brand was acquired by the London-headquartered European investment company Permira in 2014.

In the following 4 chapters, you will quickly find the 26 most important statistics relating to "Footwear industry in the United Kingdom (UK)". 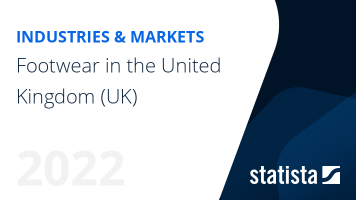 The most important key figures provide you with a compact summary of the topic of "Footwear industry in the United Kingdom (UK)" and take you straight to the corresponding statistics.

Athletic footwear in the United States