Athletic footwear in the United States - statistics and facts

Prominent market leaders in the global active footwear market include Nike, Adidas, and Under Armour. As globally-recognized athletic footwear brands, the footwear segments of Nike and Adidas brought in 23 billion and 14 billion U.S. dollars in revenue to the respective companies in 2020. Nike’s higher revenue is reflected in their brand value. In 2021, Nike’s global brand value was more than three times higher than that of Adidas.

In a survey conducted in Spring 2021, 56 percent of American teenagers chose Nike as their preferred footwear brand, versus 9 percent who preferred Adidas. This is possibly linked to Nike’s advertising. Although Adidas ramped up its advertising spending in the United States from around 386 million U.S. dollars in 2012 to more than 688 million U.S. dollars in 2019, their marketing effort still pales in comparison to Nike’s 1.47 billion ad spend on the American market that year. Both companies have consistently ranked highly on the American customer athletic footwear satisfaction index.
This text provides general information. Statista assumes no liability for the information given being complete or correct. Due to varying update cycles, statistics can display more up-to-date data than referenced in the text.
P. Smith
Research expert covering apparel industry and general merchandise
Get in touch with us now
Published by P. Smith, May 12, 2022

Per capita volume sales of athletic footwear in the U.S.
0.34 pieces

Average annual U.S. consumer spend on footwear in 2021, by age 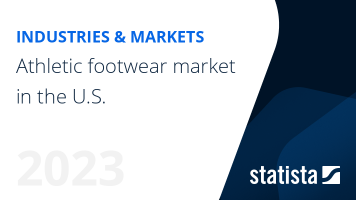 The most important key figures provide you with a compact summary of the topic of "Athletic footwear in the United States" and take you straight to the corresponding statistics.