In 2021, South Korea was the eighth largest energy-consuming country in the world with over 12 exajoules of primary energy consumed domestically . The country’s manufacturing-dependent and growth-oriented economy has fuelled this demand for energy for years, with figures having increased over time. Indeed, most of the final energy consumed in the country was by the industrial sector. As a response, the South Korean government had announced its Energy Efficiency Innovation Strategy (EEIS) in 2019, aiming for a reduction of 14.4 percent in its total final energy consumption compared to its Business-as-Usual emissions projections by 2030.

South Korea lacks natural resources domestically; consequently, most of its energy depends on imports. As of 2015, over 80 percent of South Korea’s total energy consumption came from imports, which put the country in the top five globally in terms of net energy imports as a percentage of energy use. Around 980 million barrels of crude oil were imported in 2020, with those from the Middle East accounting for almost 70 percent of total oil imports by volume. Saudi Arabia, the United States, Kuwait, and Russia were the leading origin countries of crude oil imports by value.

Despite the high dependency on energy imports, domestic energy production has been steadily increasing over the last decade. Among available energy sources, nuclear energy has been a significant contributor to the South Korean energy grid, accounting for nearly 60 percent of total domestic energy production. However, new nuclear plant construction has slowed, and the government has decided to close several existing nuclear energy plants, such as Kori 1 and Wolsong 1, after expressing concerns about the potential risks of aging nuclear reactors. In its place, the EEIS has outlined plans to replace at least 20 percent of total energy generation with renewables by 2030.
This text provides general information. Statista assumes no liability for the information given being complete or correct. Due to varying update cycles, statistics can display more up-to-date data than referenced in the text.
Published by Statista Research Department, Nov 9, 2022 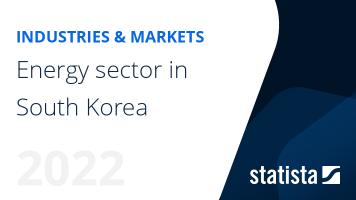 The most important key figures provide you with a compact summary of the topic of "Energy sector in South Korea" and take you straight to the corresponding statistics.