Salt, a crucial element of life, is manufactured as a seasoning for human consumption as well as used in chemical industries. The most prominent use for salt is as a feedstock for the production of industrial chemicals. The worldwide market for salt production was valued at over 29 billion U.S. dollars in 2021, with 290 million metric tons of salt produced that year. China, the United States, and India are the top three countries for salt production and altogether produced a combined total of over 130 million metric tons of salt in 2021.

India exports the most salt of any country, transporting over 8.5 billion kilograms in 2021. The United States was the leading importer of salt worldwide that year, where it is used in industrial applications within sectors such as pharmaceuticals, agriculture and livestock, and chemical productions.

The United States imported about 16 million metric tons of salt in 2021, a slight increase from 15.6 million the year before. As of 2021, the price of vacuum and open pan salt in the United States was estimated to stand at 220 U.S. dollars per ton, while the price of solar salt amounted to approximately 120 U.S. dollars per ton during the same year.

Americans' have been eating less salt since 2014, when there was a peak of a reported 55.6 million metric tons. Consumers in the U.S. tend to limit their food intake based on artificial sweeteners, sugar or artificial preservatives rather than salt. However, reports have shown that diets high in sodium do have some health risks, such as high blood pressure, stroke, or heart failure. The estimated average adult salt intake equivalent in the United States amounted to nine grams per day. In China salt consumption per adult was estimated to about 10.9 grams per day.
This text provides general information. Statista assumes no liability for the information given being complete or correct. Due to varying update cycles, statistics can display more up-to-date data than referenced in the text. 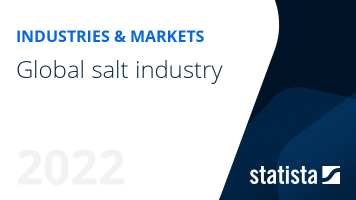 The most important key figures provide you with a compact summary of the topic of "Salt industry worldwide" and take you straight to the corresponding statistics.