The United States Department of Agriculture (USDA) recommends consumers maintain a nutritious and balanced diet. To promote this message, they developed the nutrition guide "MyPlate", which follows the recommendations made in the "Dietary Guidelines for Americans".
A recent survey revealed that the vast majority of Americans, across all generational cohorts believed that they “could be healthier”. When one considers the alarming obesity rates in the United States, it comes as no surprise that consumers tend to be most interested in foods and nutrients that will help them manage their weight. Over the past year, U.S. consumers have made an effort to eat more fruits and vegetables and made small changes to achieve an overall healthy diet.

Although meat, eggs, and dairy are still the most popular sources of protein among Americans, vegetarian and vegan diets are gaining traction, with about 19 percent of U.S. consumers preferring legumes, nuts, and seeds over animal protein in 2017. In general, U.S. consumers considered vegetarian, vegan and gluten-free diets to be healthy. Eating approaches also differed among generations. Vegetarian and vegan diets tend to be most popular among Americans under the age of 50. For Americans who prefer plant based protein over animal protein, the most common reason is related to taste and palatability. However, for Millennials who adopted a meat-free diet, 51 percent wanted to improve their overall health and 32 percent did so for environmental reasons.

There is also a difference of opinion between experts and the public, in terms of which types of food they consider healthy. While 90 percent of experts agree that hummus is a healthy food, only about 66 percent of the public believe so. The public opinion regarding certain calorie sources has also changed drastically over the years. In 2013, the majority of Americans believed that all calorie sources were equally likely to cause weight gain; while in 2018, sugar has been singled out as the leading cause of weight gain among all food categories.
This text provides general information. Statista assumes no liability for the information given being complete or correct. Due to varying update cycles, statistics can display more up-to-date data than referenced in the text.
Published by Statista Research Department, Dec 1, 2020

People who believe they could eat healthier
71%

U.S. shoppers' self-assessment of own diet 2015

U.S. consumers who consider ingredients in foods and beverages a lot
44%

U.S. consumers: Consideration of ingredients in foods and beverages 2013-2015

Consumer spending in the quick service restaurant sector in the U.S. 2004-2021 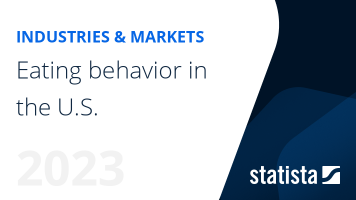 Go to report Eating behavior in the U.S.
Top Seller

The most important key figures provide you with a compact summary of the topic of "U.S. Eating Behavior" and take you straight to the corresponding statistics.

Eating behavior in the U.S.
Vitamins, minerals and supplements in the U.S.