Together with Spain and Greece, Italy is one of the leading EU olive oil producers. Italy uses approximately 1.1 million hectares of cultivated land for growing olives that are later turned into olive oil. In the past years, Italian annual production of olive oil oscillated significantly. Most recently, it amounted to 366,000 tons. Olive trees are grown across the whole Italian peninsula. However, olive production is especially prominent in southern Italy. Apulia is the undisputed leading producer of olive oil with over 208,000 tons annually. Calabria and Sicily come next in terms of output with 53,000 and 34,000 tons, respectively. Apulia counted the highest number of olive oil mills, with 904 sites.

Exports of Italian olive oil have increased to an estimated volume of 209,100 tons. In terms of export value, the U.S. was the major importer of olive and pomace oil, surpassing other overseas countries, such as Japan or Canada. In the EU, Germany was the leading trade partner, with an import value of almost 172 million euros. Among the different types of olive oil, extra-virgin is the most traded one. Extra-virgin olive oil is extracted mechanically and with low temperatures to avoid potential altering of the oil’s characteristics and flavors.

Italian consumers of organic olive oil buy more Italian extra-virgin oil than any other type. Italian extra-virgin oil reported a retail sales value of over 30 million euros during the first half of 2020. In Italy, the average retail price of olive oil amounted to five euros per liter in hypermarkets. Unsurprisingly, discounters reported the lowest average price, at 4.17 euros per liter.
This text provides general information. Statista assumes no liability for the information given being complete or correct. Due to varying update cycles, statistics can display more up-to-date data than referenced in the text.

T. Ozbun
Research expert covering food retail and all food topics for Italy and Brazil
Get in touch with us now
Published by T. Ozbun, Oct 11, 2022

Change in olive oil production volume in Italy 2020, by region 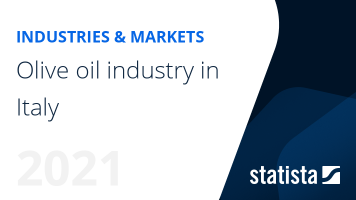 The most important key figures provide you with a compact summary of the topic of "Olive oil industry in Italy" and take you straight to the corresponding statistics.