Italy has a Mediterranean climate, but since the terrain between the north and south are different, they experience it in very different ways. Winters in the northern, more mountainous region are cold and humid, and are therefore suited to the production of grains, meat, and dairy. On the other hand, the southern area is kept temperate year round, and focus on fruit, vegetable, olive oil, and wine production. In 2020, the added value of agriculture in Italy totaled around 37.5 billion U.S. dollars.

Land use and crop production

As of 2018, the total arable land in Italy amounted to 6.7 million hectares. The total amount of arable land has fluctuated over time reaching its highest amount in the year 2012 with over 7.1 million hectares of arable land. A significant portion of this agricultural area is in the south and consists of arable land, where the land is under temporary agricultural crops. As of 2018, 74,400 hectares of land were certified for organic farming in Italy, registering an increase of 69 percent in comparison with 2013. Such areas are estimated to increase in the following years, reaching over 96,000 hectares by 2023.

In the northern, more mountainous regions, livestock farming is the primary agricultural sector. In 2019, Italy had more than six million heads of bovine animals. However, Italy is not only suited for bovinae, as goats, sheep and swine are other primary forms of livestock farming in Italy. There are approximately 8.5 million heads of swine in the country, more than bovine animals, thus emphasising Italy’s preference for pork in cuisine. Prosciutto, guanciale and mortadella are all famous cuts of Italian meat made with pork.
This text provides general information. Statista assumes no liability for the information given being complete or correct. Due to varying update cycles, statistics can display more up-to-date data than referenced in the text.

T. Ozbun
Research expert covering food retail and all food topics for Italy and Brazil
Get in touch with us now
Published by T. Ozbun, Jun 15, 2022

Land area used in Italy in 2021, by selected crops

Land area used in Italy in 2021, by selected crops

Distribution of food imported by Italy 2021, by region of origin 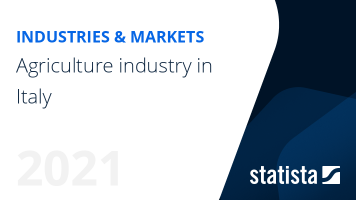 The most important key figures provide you with a compact summary of the topic of "Agricultural industry in Italy" and take you straight to the corresponding statistics.