Published by
Frédéric Michas,
Jul 28, 2022
In France, the coronavirus was first detected at the end of January 2019. It was also in France that SARS-CoV-2 made its first appearance in Europe. Three people were tested positive and one of them, an 80-year-old tourist, died from COVID-19 on February 15, 2020. The epidemic started to take off in early March 2020. By en of July 2022, over 33.7 million infections had been registered. The pandemic caused several hundred thousand deaths in France. As of July 27, 2022, there were 20.6 thousand patients currently hospitalized with a COVID-19 infection and 1,250 patients in intensive care with a COVID-19 infection.

France launched its vaccination campaign against the novel coronavirus (COVID-19) on December 27, 2020. The first vaccine to be approved by the French health authorities was the German-American vaccine developed by BioNTech-Pfizer. As of July 2022, more than 53 million people have been fully vaccinated in France, over 54 million have received at least one dose of vaccine, and 40 million have received three doses. To this day, the share of the French population vaccinated against the COVID-19 with three doses reached 58 percent, yet varied greatly from one region to another.

Although a majority of French people reacted favorably to measures to stop the spread of the COVID-19 virus, their confidence in their government to effectively manage the crisis was rather mixed. While the gradual disappearance of the lockdowns and curfews were mostly favorably by the French population, the adoption of preventive measures was not always systematic among people. In January 2022, a survey on the systematic adoption of preventive measures in France revealed that just 73 percent of French people systematically wear a face mask in public space and only 61 percent of respondents stated to frequently wash their hands.

In the following 6 chapters, you will quickly find the 26 most important statistics relating to "Coronavirus (COVID-19) in France".

The most important key figures provide you with a compact summary of the topic of "Coronavirus (COVID-19) in France" and take you straight to the corresponding statistics. 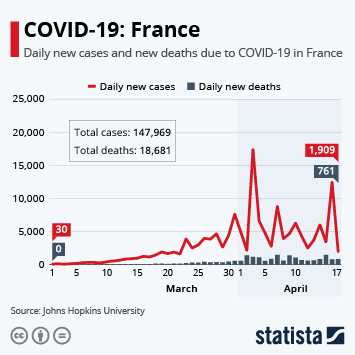