Spain’s COVID-19 immunization campaign was launched on December 27, 2020, days after the European Medicines Agency (EMA) authorized a vaccine developed by BioNTech and Pfizer. As of March 2021, three other vaccines (Moderna, AztraZeneca/Oxford University, Janssen) had already been approved for use in the European Union. In Spain, the first doses were distributed among some of the most vulnerable groups, including residents and personnel working in retirement homes, front-line healthcare workers, highly dependent people, and seniors aged 80 and older. By October 2022, the number of COVID-19 vaccination doses administered in the country had surpassed 95.8 million, and adults in every age group were already getting vaccinated.

A matter of supply and demand

While after the launch of its vaccination campaign, Spain was among the countries with the largest share of people inoculated against COVID-19, both in Europe and globally, one and a half years later the country ranked twelfth within its region. As of August 2022, over 85 percent of the adult-population had already received the recommended amount of doses necessary for immunization, with older groups reaching even higher percentages, and the share of Spaniards with at least one dose, surpassing the 86 percent.

The success of Spain’s vaccination campaign has relied on two basic factors: supply and demand. While the country’s well established universal healthcare system has played an important role on providing citizens with enough doses, the percentages reached so far would not have been possible without the population’s willingness to get vaccinated. A general trust in vaccines, the country’s experience with pandemics, and a social culture where relationships are more extensively held among generations, all favored vaccine acceptance.

Despite this progress, Spain still has some challenges ahead. While nearly everyone within the oldest population is fully vaccinated, the campaign has slowed down, and some groups remain hesitant. In addition to those who are not willing to get vaccinated, are those who cannot. Moreover, new virus variants and breakthrough infections bring additional uncertainty, which has encouraged authorities to implement supplementary measures. Teenagers and children aged five and older can now get vaccinated, largely debated booster shots are now offered to populations at risk, and the waiting time for those who were already infected has been shortened. Looking ahead, it is the administration of additional booster shots that will complement the country’s immunization efforts.

Find the most up-to-date information about the coronavirus pandemic in the world under Statista’s COVID-19 facts and figures site.
This text provides general information. Statista assumes no liability for the information given being complete or correct. Due to varying update cycles, statistics can display more up-to-date data than referenced in the text.

J. Mendoza
Research expert covering health, pharma and medtech
Get in touch with us now
Published by J. Mendoza, Jan 13, 2023

Number of doses administered per 100 inhabitants
201.45

COVID-19 vaccine doses administered worldwide as of January 9, 2023, by country

COVID-19: main reasons for not getting vaccinated in Spain 2022 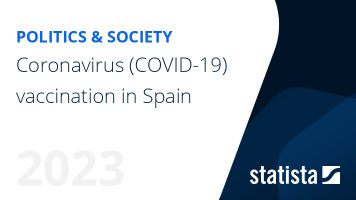 The most important key figures provide you with a compact summary of the topic of "Coronavirus (COVID-19) vaccination in Spain" and take you straight to the corresponding statistics.