McDonald's is the world's most valuable fast-food brand. Estimated at around 155 million U.S. dollars in 2021, it outranked by a large margin other household names for the quick-service restaurant industry, such as KFC and Subway. In Latin America and the Caribbean, the history of this fast-food chain dates to the opening of its first restaurant in Puerto Rico, back in 1967. Since the late-2000s, McDonald’s operations in the region have mostly been under the management of Arcos Dorados Holdings Inc., the brand’s largest franchisee worldwide.

Arcos Dorados – which translates to 'Golden Arches', inspired by the brand’s famous logo – is headed by Colombian entrepreneur Woods Staton, though it is headquartered in the Uruguayan capital of Montevideo. The company generates most of its revenue by directly managing McDonald's-branded outlets unlike the U.S.-based McDonald's Corporation which earns a large share of its revenue by franchising restaurants around the world. Considered one of the most successful food service companies in the Americas, the annual revenue generated by Arcos Dorados fluctuated between three and four billion U.S. dollars before the coronavirus (COVID-19) pandemic. Nevertheless, as a consequence of the global health crisis, this figure shrank to less than two billion dollars in 2020 and did not bounce back entirely in 2021.

Brazil is the Latin American country where the fast-food brand has proved most profitable in the past years. The first McDonald’s was established in the country in the late 1970s. By 2020, the region’s largest economy was home to more than one thousand establishments, roughly half of the restaurants operated by Arcos Dorados. The country was followed by the company’s North Latin American subregion. Brazil also harbors the highest amount of McDonald's Dessert Centers in Latin America. In the case of McCafé outlets the holding’s South American subregion (which also includes some Caribbean islands) takes the lead. However, Brazil alone accounts for approximately one-third of establishments of this sort.

The role of advertising

In Latin America and around the world, the McDonald's brand plays in the big leagues of advertisement. In 2020, McDonald’s topped the ranking of the leading outdoor advertisers in the United States, with an ad spend of 60 million U.S. dollars. In the case of Arcos Dorados, the advertising expenses surpassed 130 thousand U.S. dollars in 2021.
This text provides general information. Statista assumes no liability for the information given being complete or correct. Due to varying update cycles, statistics can display more up-to-date data than referenced in the text.

Ana M. López
Research expert covering travel, tourism and hospitality
Get in touch with us now
Published by Ana M. López, May 5, 2022

Number of McDonald's restaurants in Brazil
1,052 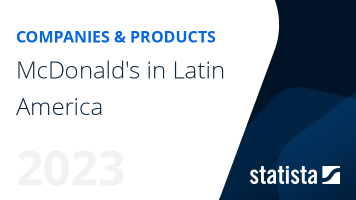 The most important key figures provide you with a compact summary of the topic of "McDonald's in Latin America" and take you straight to the corresponding statistics.