Since ancient times, food has been a distinctive feature of every culture and civilization around the world. It is, apart from a means of survival, a pillar for social interaction and recreation. Beyond everyday family life, food and beverage consumption has developed into an entire out-of-home industry which includes restaurants, cafés, bars, food trucks, and catering services. In 2020, this type of businesses constituted a global market worth more than three trillion U.S. dollars.
In Mexico, food and beverage services contributed approximately 944 billion Mexican pesos to the country’s gross domestic product in 2021. Considering exchange rates of December 31 of that year, this figure represents around 46 billion U.S. dollars, which is a recovery from the strong setback registered in 2020 due to the coronavirus (COVID-19) pandemic.

The Mexican food service industry constitutes the largest portion of the tourism business landscape. Mostly composed of small- and medium-sized enterprises according to the most recent national economic census, around one-quarter of the Mexican food service businesses are operated in either family houses or as semi-ambulant stands. In technical terms, these establishments are considered part of the street food segment, for which Mexico is worldwide famous. ‘Antojitos’ —literally translated into English as cravings — are a typical form of Mexican street food that includes a wide range of options such as tacos, quesadillas, empanadas, chilaquiles, nachos, and tortas. Though restaurants and street food vendors offering typical dishes are present across the entire country, Michoacán – located west of Mexico City – was ranked by Mexican participants of a 2020 survey as the state with the best food in the country.

Mexico is also home to some of Latin America’s key players in the market. Among them is Alsea S.A.B. de C.V. – a multi-brand company present in the industry since 1997. The foodservice group, which operates world-renown brands like Starbucks and Domino’s Pizza, managed to expand outside Mexican territory. In 2021, Alsea was also present in ten South American and European countries, with Spain ranking as its second-largest market based on the number of establishments. In the national market, Restaurantes Toks ranks among the top foodservice providers as well, with nearly 200 outlets distributed across the country. Toks is one of the brands operated by Grupo Gigante – a holding group with subsidiaries in various retail segments.
This text provides general information. Statista assumes no liability for the information given being complete or correct. Due to varying update cycles, statistics can display more up-to-date data than referenced in the text.

Share of paid tourism jobs in food and beverage services
27.4%

Share of employment in tourism in Mexico 2020, by industry 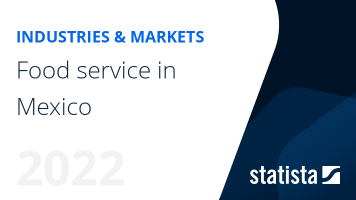 The most important key figures provide you with a compact summary of the topic of "Food service in Mexico" and take you straight to the corresponding statistics.