Although Norway had the lowest per capita consumption of alcohol among all Nordic countries in recent years, its overall household spending on alcoholic beverages increased constantly in the period from 2010 to 2021. According to preliminary figures for 2021, it amounted to just over 64 billion Norwegian kroner. That year, the sales volume of alcohol fluctuated quarterly with a dip in the third quarter, reaching approximately 119 thousand liters.
Norway has strong restrictions regarding alcohol sales. Beverages with an alcohol content higher than 4.75 percent are only allowed to be sold by Vinmonopolet, which is the government-owned alcoholic beverage retailer. Beer, for example, usually contains less alcohol and is also available in grocery stores. Nearly 256 million liters of beer were sold in Norway in 2021. By comparison, that same year, in Vinmonopolet stores the sales volume was roughly 31 million liters. As spirits and table wines contain much more alcohol than 4.75 percent, they are only offered in the government-owned retailer. The sales volume of spirits amounted to around 16 million liters in 2021, of which vodka was the most sold type. It was ahead of whisky, aquavit, liqueur and brandy. Table wines generated even higher sales volumes. From 63 million liters in 2010 to 97 million liters in 2021. Red wines seemed to be the favorite type of table wine among Norwegian consumers, followed by white and sparkling.

Regarding brands, GullMack led the ranking of beer brands in Norway. Approximately 151 thousand liters were sold in Vinmonopolet stores. The Mack Brewery (Macks Ølbrggeri) is the northernmost brewery in the world. It was founded in 1877 in Tromsø and is located in Nordkjosbotn today. For spirits, Absolut Vodka ranked first based on its sales volume of almost 721 thousand liters in the alcoholic beverage retailer. The Swedish vodka brand belongs to the French group Pernod Ricard and was followed by Baileys Original Irish Cream and Jägermeister. Among wine brands sold in the Norwegian alcoholic beverage retailer, Falling Feather Ruby Cabernet wines were leading, reaching around two million liters. The second most sold wine was Marqués de Nombrevilla Garn, followd by Tommasi Graticcio Appassionato wines.

When looking at the consumer price indexes of these different alcoholic beverages, it increased for all three types in the past years. In fact, in 2021, it was measured at 104.2 for beer, 111.7 for spirits and 113.7 for wine, where the year 2015 equals 100. This index measures changes in average costs of most consumer goods and services. It reports inflation and deflation (rising and falling prices).
This text provides general information. Statista assumes no liability for the information given being complete or correct. Due to varying update cycles, statistics can display more up-to-date data than referenced in the text.
Published by M. Ridder, Jul 26, 2022

Per capita consumption of alcohol in Norway
6.1L

Household consumption expenditure on alcohol and tobacco in Norway 2010-2021

Household consumption expenditure on alcohol and tobacco in Norway 2010-2021 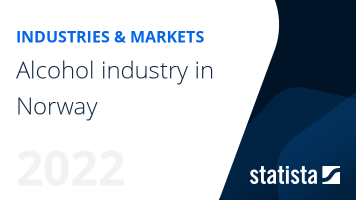 The most important key figures provide you with a compact summary of the topic of "Alcohol industry in Norway" and take you straight to the corresponding statistics.