In all the Nordic countries except Denmark, alcoholic beverages are only available in government-owned store chains. This applies to all beverages with higher alcohol content; low alcohol drinks are thus available in regular supermarkets and convenience stores. These strict laws are in place to prevent alcoholism and the negative health effects of heavy drinking on health. In Sweden, Systembolaget is regulating alcohol sales, while in Finland, the corresponding monopoly is called Alko. In Norway, Vinmonopolet took matters into it's own hands. It is, along with the Icelandic Vínbúðin, the oldest government regulated alcoholic beverage retailing chain in Northern Europe, founded in 1922. And even though Denmark isn’t directly included, the Faroe Islands, which are an autonomous territory within the Kingdom of Denmark, do have their own alcoholic beverage retail monopoly called Rúsdrekkasøla Landsins.
Sweden: Systembolaget

Wine, beer and spirits with an alcohol content higher than 3.5 percent are the main products in the range of the 438 stores of Systembolaget, but low and non-alcoholic drinks are also offered. Systembolaget generated a net revenue with a value of 28.5 million Swedish kronor in 2016. The bestselling beverage is beer. Sales volume exceeded 242 million liters in 2017. Among all beers sold in Systembolaget, the Swedish Mariestads Export was the bestseller. The manufacturer is the brewery Spendrups, which is also among the leading beer suppliers for Systembolaget. Spendrups ranked second, ahead of Åbro Bryggeri, but behind Carlsberg Sverige, which traded beer with a volume of 66 million liters.

Vodka consumption has a long tradition in Finland and the domestic brands are also the most popular ones, according to sales figures. The bestselling sprits brand in Alko stores in 2017 was Leijona Viina, with three million liters sold. The sales volume of all products in this category amounted to 13.9 million liters in 2017. Most vodka and spirits were sold in the region of Uusimaa. All over the country, there are Alko stores. In 2016, there were 354 stores and 66 pick-up points in Finland, which generated approximately 1.16 billion euros in revenue.

The chain Vínbúðin is operated by the State Alcohol and Tobacco Company of Iceland, ÁTVR. Alcohol sales made up for the largest share of the company’s operating revenue in 2016. That year, value amounted to 23.7 billion Icelandic krónur, in contrast to only 9.3 billion krónur generated with tobacco sales. On national holidays, interest in alcohol predictably rises, and Christmas and New Year's Eve are the peak occasions for buying alcohol, which is also reflected in the number of customers in Vínbúðin stores, from 28 thousand on regular Fridays to over 43 thousand on December 30, 2016 . In 2016, the total annual amount of alcoholic beverages sold by the chain totaled 20.9 billion liters.

The Faroese government owned and regulated alcoholic beverage retailer saw its largest turnover in 2016 during July (14.8 million Danish kroner) and December (17.2 million Danish kroner). Even though its main focus are alcoholic beverages, the retailer offers non-alcoholic products too. In 2016, the sales volume amounted to 2,268 liters. Still a small amount, compared to those 274 thousand liters of spirits and 1.1 million liters of beer sold in the same year. The leading beer brand in 2017 was Royal Export, with a volume of roughly 123 thousand liters sold. The domestic Føroya Bjór Veðr ranked second, with sales of 113 thousand liters.
This text provides general information. Statista assumes no liability for the information given being complete or correct. Due to varying update cycles, statistics can display more up-to-date data than referenced in the text.
Published by M. Ridder, Sep 3, 2018

Number of Systembolaget stores and agents in Sweden 2020, by province

Number of Vinmonopolet outlets in Norway
334

Number of Vinmonopolet outlets in Norway 2013-2019

Number of Alko stores in Finland
369 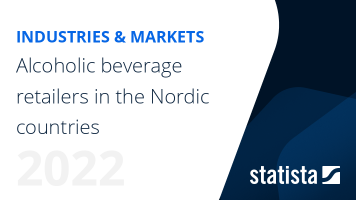 The most important key figures provide you with a compact summary of the topic of "Alcoholic beverage retailers in the Nordic countries" and take you straight to the corresponding statistics.