Published by
Ana M. López,
Nov 17, 2022
Brazil’s connection to fashion is globally recognized not only as the country of origin of many top models, but also as one of the most prominent industries in the world. Brazil was the only Latin American country listed among the top 10 global markets for clothing and accessories in 2019, surpassing Japan and Germany in revenue. That same year, the Portuguese-speaking country also ranked for the ninth largest revenue of women’s and girls' apparel in the world, ahead of France. In the men’s and boy’s apparel market, Brazil occupied the eighth place in 2018, ahead of Russia and South Korea.
Like many industries worldwide, however, the Brazilian apparel industry could also be severely impacted by the COVID-19 crisis. For 2020, Brazil is expected to reduce its total apparel production by approximately one billion pieces, which could translate into a production value noticeably lower than the previous year’s. This could also bring severe effects in the country’s clothing and accessories exports, which in 2019 amounted to over 150 billion U.S. dollars.

The family clothing store Lojas Renner was the leading Brazilian fashion retailer, based on net revenue. The company, headquartered in Porto Alegre, increased its numbers of stores by around 38 percent between 2015 and 2019 and in the last year reported a gross profit 1.6 times higher than at the beginning of that same period.

In the segment of accessories, Chilli Beans – a Brazilian eyewear brand – stands out as the largest Brazilian franchise in the fashion industry in 2019, with over eight hundred units operating across Latin America, as well as in the United States, Portugal, and Kuwait. That same year, the traditional textile company Cia. Hering ranked second among the largest Brazilian fashion franchises. Hering has been a player in the Brazilian textile and clothing industry since 1880, though struggling to increase its net sales revenues in recent years.

Main sales channels for the industry

Throughout most of the 2010s, physical stores remained the most important channel for the retail sales of clothing and accessories in Brazil, despite a continuous decrease since 2014. But as the retail world moves increasingly towards digital formats, the number of internet companies in this Brazilian industry showed a growing trend in recent years as well. It is not surprising then that in 2019, nearly half of e-commerce consumers in Brazil reported purchasing apparel, footwear, or sporting goods online.

In the following 7 chapters, you will quickly find the 36 most important statistics relating to "Apparel industry in Brazil". 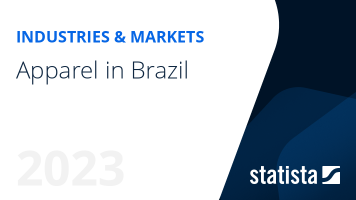 The most important key figures provide you with a compact summary of the topic of "Apparel industry in Brazil" and take you straight to the corresponding statistics.

Ana M. López
Research expert covering travel, tourism and hospitality
Get in touch with us now