Like in the global apparel market, Brazil is also a key player in the world’s footwear industry. In recent years, the Latin American country has been one of the major shoe producers worldwide, contributing with over 900 million pairs of shoes annually to the domestic and external markets, far above other top footwear producers like Turkey or Pakistan. And with one of the largest populations worldwide, Brazil has assuredly managed to rank among the top global footwear consumers, with an average per capita consumption of roughly four pairs of shoes in 2019.

Brazilian “chinelos” in the world

Brazil’s beaches and mostly tropical weather have not only influenced the country’s tourism sector but have also played a role in the Brazilian footwear industry becoming one of the major producers of a particular and world renowned type of sandal: the flip flops, also known in the Portuguese-speaking nation as “chinelos”. In 2019, this segment accounted for over 40 percent of Brazilian shoe production and for nearly half the volume of footwear exported to other markets. As a result, two of the leading footwear companies in the country have successfully placed their major flip flop brands, Havaianas and Ipanema, as some of the most recognizable Brazilian products around the world.

COVID-19 impact on the industry

As of mid-2020, the Brazilian footwear industry had already experienced the severe effects of the COVID-19 pandemic. Between January and July of that year, Brazilian shoe production dropped by over one third in comparison to the same period in the previous year. And for the remaining of that year, it is not expected to show any significant signs of recovery. Consequently, Brazil's exports of shoes have also been harshly affected, plunging by more than 25 percent in volume and with an even higher decline in value as of August of 2020. For the Brazilian internal market, the global COVID-19 crisis could also translate into a perceivable drop in apparent consumption of footwear, which even in an optimistic scenario is expected to go down by more than 20 percent.
This text provides general information. Statista assumes no liability for the information given being complete or correct. Due to varying update cycles, statistics can display more up-to-date data than referenced in the text.

Number of jobs in the footwear industry
269k 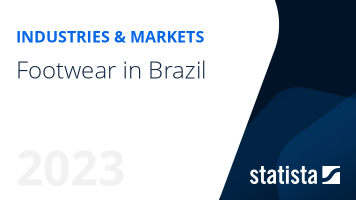 The most important key figures provide you with a compact summary of the topic of "Footwear industry in Brazil" and take you straight to the corresponding statistics.