The textile and apparel industry collectively represent one of the most traditional and essential sectors of Colombia’s economy. Accounting for approximately 9.4 percent of the country's manufacturing sector’s GDP, this robust industry employs over half a million people and generates more than 20 trillion Colombian pesos in annual revenue. This Latin American nation not only supplies its local market but is also a major apparel exporter. Thanks to the quality of its garments and numerous free trade agreements, Colombia is well-known for products such as jeans, bras, swimwear, and shapewear. The country is among the top three leading exporters of girdles and corselettes worldwide, competing with the manufacturing giant, China.

In 2019, the country’s export value of clothing amounted to more than half a billion U.S. dollars. The United States comprised by far the majority of these sales abroad, making it Colombia’s main export destination for apparel products. Over the past years, however, the imports of garments have surpassed the exports, creating a trade deficit since 2012. This shows that Colombia gradually shifted to being an importing market, partially as a result of the extensive arrival of low-price clothing from Asia. Still, a large share of textile imports are underestimated, considering the massive amount of textiles and apparel entering the country as contraband.

Colombia’s leading clothing producers are Manufacturas Eliot S.A.S. and Internacional de Distribuciones de Vestuario de Moda S.A.S. Each company owns one of the nation’s most purchased brands, namely, PatPrimo and Carmel, respectively. Carmel, an underwear brand, is included in Colombia’s lingerie segment, which is estimated to generate a revenue of over 2.4 trillion Colombian pesos in 2021. At the same time, PatPrimo, operating in part as a menswear brand, contributes to the 7.8 trillion pesos in income forecasted for the nation’s menswear segment.

When it comes to swimwear, the anticipated revenue is considerably lower than in the lingerie and menswear segments. Nonetheless, this sector is significant for Colombia, as the country is the largest exporter of swimsuits in Latin America, even surpassing Brazil. Among the most renowned brands in this segment are Maaji, Agua Bendita, and Onda de Mar, which jointly generate an annual revenue of almost 100 billion Colombian pesos.
This text provides general information. Statista assumes no liability for the information given being complete or correct. Due to varying update cycles, statistics can display more up-to-date data than referenced in the text.
Published by Statista Research Department, Nov 17, 2022 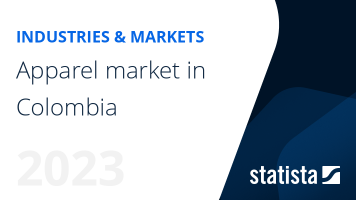 The most important key figures provide you with a compact summary of the topic of "Textile and apparel industry in Colombia" and take you straight to the corresponding statistics.