Cerebrovascular diseases refer to when the brain, or a part of the brain, experiences a restriction in flow of blood. The ways in which that can happen are a vessel narrowing, a clot forming, a complete blockage, or the rupture of a blood vessel. The most common cerebrovascular disorder is a stroke, although other cardiovascular conditions include aneurysms and subarachnoid hemorrhages. In 2018, cerebrovascular diseases accounted for 15.4 thousand deaths in the UK, making it the fifth leading cause of death that year.
In the period during 2019/20, there were over 135.6 thousand strokes diagnosed in the UK. The number of strokes in the country has increased slightly since 2011. Strokes are more common among men, and a person’s chances of experiencing a stroke increases with age. In 2017, the rate of strokes for those aged over 75 years of age was 1,318 per 100,000, while it was 560 per 100,000 for those between 65 and 74 years of age. When broken down by country, Scotland had the highest rate of strokes, followed by Northern Ireland.

Despite strokes accounting for one of the main causes of death in the UK and the incidence not changing much over the last ten years, the mortality rate from strokes has been decreasing significantly. In 2019, the rate was 54 per 100,000. This represents a decline in mortality of over 57 percent when compared to the rate in 2000. The most common single risk factor involved in stroke deaths was high blood pressure, with this being attributable for over 43 percent of stroke deaths in 2019. Furthermore, 20 percent of deaths from a stroke that year were due to bad diets, while 29 percent of deaths were because of diabetes. Scotland had the highest rate of mortality from strokes in 2019, with 73 deaths per 100,000, much higher than other UK countries.
This text provides general information. Statista assumes no liability for the information given being complete or correct. Due to varying update cycles, statistics can display more up-to-date data than referenced in the text.

Number of deaths from cerebrovascular disease in the UK
15,437

Mortality rate from strokes in the United Kingdom 2000-2019

Financial cost of strokes in the healthcare sector in the UK
2.65bn GBP

Healthcare costs of strokes in the United Kingdom (UK) 2015, by area

Mortality rate from strokes in the United Kingdom 2000-2019

Stroke: number of deaths in England and Wales 2020, by gender and age 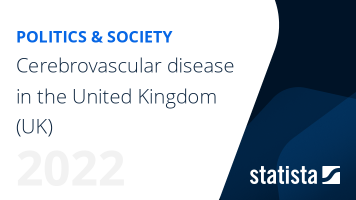 The most important key figures provide you with a compact summary of the topic of "Cerebrovascular disease in the UK" and take you straight to the corresponding statistics.