Events are ever evolving, becoming more special and memorable as demands for unique experiences are continuously growing as well. However, what does the event landscape look like in the Netherlands? And more importantly, what is the impact of the coronavirus (COVID-19)?
To start, in 2019 approximately 725 million U.S dollars worth of event tickets were sold in the Netherlands, which is an increase compared to the previous two years. Furthermore, despite predictions of a significant decrease in 2020 due to COVID-19, it is estimated that the industry will recover and grow to just over one billion U.S. dollars of sold event tickets by 2024. Events open to the general public also attracted many visitors in 2018. The most visited public event in the Netherlands were the International Four Day Marches festivities in Nijmegen. Approximately 1.61 million people visited the largest multiple day marching event in the world.

According to the Statista Digital Market Outlook, music events are the largest segment of the Dutch event market. In 2019, the majority of music festivals that were held in the Netherlands were labeled as pop music events. Six percent, on the other hand, were classical, whereas jazz festivals accounted for just five percent. Two events that are globally well-known in the Netherlands are the Pinkpop festival and the Amsterdam Dance Event (ADE). The Pinkpop festival in Landgraaf (Limburg), a large three-day annual music event held in June, welcomed 80,500 visitors in 2019, whereas 400,000 visitors enjoyed the Amsterdam Dance Event in the same year. ADE is a music conference on workshops and tech demos, as well as a festival focused on dance music, and is one of the largest conferences for electronic dance music in the world.

Sports events accounted for around 21 percent of the total event tickets sold in 2019. The most popular sports broadcast through media and events were football, Formula one and speed skating in 2019. Just over 40 percent of the respondents followed football by using media or events, while 20 percent said they followed Formula one. The latter is likely due to the Dutch racer Max Verstappen, currently driving for Red Bull Racing and one of the most prominent drivers on the circuit. Looking at a survey on visit frequency for sports events, over half of the respondents said that they never visited a sports event in 2019. A quarter, on the other hand, did visit once a month.

Business events, or meetings, incentives, conventions, and exhibitions (MICE), are often trade-related and focused on networking. The number of trade shows in the Netherlands grew exponentially between 2009 and 2018. In 2009, 18 trade shows took place, whereas by 2018 this increased to 132. Exhibitions, on the other hand, can attract both trade visitors as well as regular visitors. In 2018, De Huishoudbeurs (home and lifestyle) attracted approximately 210,000 visitors, whereas the holiday fair (Vakantiebeurs) registered 105,369 visitors.

It is no surprise that the coronavirus pandemic dealt a great blow to the event sector. It was estimated that Dutch events would reach a revenue of nearly 7.5 billion euros in 2020, but due to COVID-19 the industry estimated nearly half of that prediction would evaporate, expecting a loss of 3.5 billion euros with conferences and meetings having the largest decrease in revenue. This will have a direct effect on the number of jobs in the sector. As of March 2020, estimations showed a total of 48,000 jobs will be lost. Employment within the public events are taking the hardest hit, with an estimated loss of 17,000 jobs.
This text provides general information. Statista assumes no liability for the information given being complete or correct. Due to varying update cycles, statistics can display more up-to-date data than referenced in the text.

Ana M. López
Research expert covering travel, tourism and hospitality
Get in touch with us now
Published by Ana M. López, May 5, 2022

Number of visitors to Secura
43.7k

Leading exhibitions in Brussels (Belgium) 2017, by number of visitors

Number of UIA congresses and meetings in Brussels-Capital Region
290

Number of congresses and meetings Brussels-Capital Region 2013-2020, by association 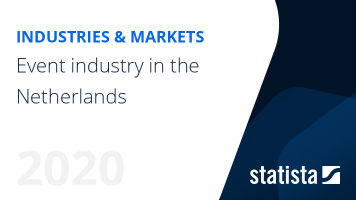 Go to report Event industry in the Netherlands
Top Seller

The most important key figures provide you with a compact summary of the topic of "Event industry in the Netherlands" and take you straight to the corresponding statistics.