Published by Statista Research Department, Jan 6, 2023
Virtual events have been donating a lifeline for companies and individuals in a world upended by the COVID-19 pandemic. In 2020, the market size of the global meetings, incentives, conferences, and exhibitions (MICE) industry was estimated at approximately one trillion U.S. dollars. Companies worldwide have been exploring digital experiences to engage consumers and audiences weathering COVID-19’s impact on business. Almost half of marketers surveyed worldwide in 2021 said their workplace an digital engagement strategies completely changed following the COVID-19 outbreak.

The pandemic has forced exhibition companies to cancel in-person events and explore digital formats throughout 2020 and 2021, with one-fifth of trade shows worldwide being organized as digital events in the latter year. The move to virtual was also reflected in company budgeting, with nearly four out of ten marketers and exhibitors in the United States saying they planned to increase spending on virtual events in 2021. A survey among marketers worldwide revealed that 40 percent of their events were projected to be virtual in 2022, a five percent increase from 2020. Hybrid event experiences – offering both in-person and virtual experiences – are also becoming more common. In 2021, almost one-third of trade shows worldwide were staged as hybrid events.

When it comes to the tools utilized to carry out virtual events, webinars were favored by roughly half of global event attendees. The central role of webinars in online event marketing was confirmed by a June 2021 survey in which a whopping 99 percent of polled companies agreed that they represented a critical element of their marketing plan. Live meetings software was favored by 43 percent of respondents, while more than one in three said they preferred a fully immersive event experience. Livestream video was used by almost three-fourths of global marketers as a digital engagement tactic as of June 2021, while an additional one out of five said they planned on using it. The surge in online experiences in 2020 has seen numerous video calling platforms go head-to-head for market share. Zoom turned out to be a clear victor, with more than half of surveyed companies using it for their teleconferences, while a little over one in ten opted for Microsoft Teams.

A 2020 survey carried out among large event organizers worldwide showed that almost half of them used engagement, namely total registration and attendance numbers, to gauge the effectiveness of virtual events. The pricing of hybrid events was considered the main financial challenge among three out of ten business event planners and suppliers worldwide. Making the physical and digital experience equally good was seen by almost half of surveyed marketers as being an obstacle to a hybrid event’s success. As life slowly appears to roll back to normal regarding in-person event capabilities, the intention to go back to networking face-to-face appears to be alive and well, with more than half of surveyed B2B marketers saying they would prefer to attend an in-person rather than virtual version of a hybrid event. One in two employees, however, deem the ability to work remotely an important decision factor for future employment - one of many signs that a synergy of virtual and in-person solutions is here for the long haul.

In the following 4 chapters, you will quickly find the 24 most important statistics relating to "Virtual event marketing". 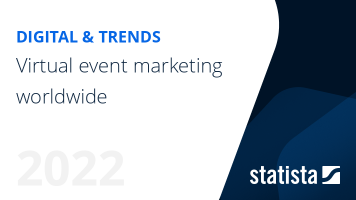 The most important key figures provide you with a compact summary of the topic of "Virtual event marketing" and take you straight to the corresponding statistics.