Published by Statista Research Department, Oct 27, 2022
It is difficult to imagine a time when cell phones were not part of our daily routine. These mobile devices managed to carve a place of their own in almost the entirety of the French population in an extremely short amount of time. While smartphones can be used both as a mobile phone and a portable computing device, mobile phones are merely used to send and receive calls and texts over a radio frequency.
Cell phone ownership has become so widespread that there are more mobile cellular subscriptions than inhabitants, a number that has been increasing over the past twenty years. Only less than one household out of ten does not have mobile phone access. Still, the share of mobile phone users has decreased sharply since 2011 in favor of more performant and versatile devices, accounting for less than 20 percent as of 2019.

While the majority of cell phone owners had a regular cell phone in 2011, smartphones have very quickly taken over and were the dominant choice as early as 2014. In 2019, nearly 80 percent of cell phones owned by the French were smartphones. Samsung is by far the favorite cell phone brand of the French population, followed by Apple and Nokia. In terms of operating systems, Android has won the hearts of many consumers and is the most popular, ahead of Apple's iOS.

Mobile phones have evolved with its target audience and offer more services than ever. Far from being limited to calls or texts, half of users claim to use their mobile phone for more advanced features such as reading emails or surfing the internet. Only a very small percentage used their mobile phone first and foremost to call someone. Phones are everyday companions, more often than not the first thing we see in the morning and the last we check before sleeping. Indeed, mobile phones are the most used devices to surf online during evenings.

In the following 5 chapters, you will quickly find the 35 most important statistics relating to "Mobile telephony in France". 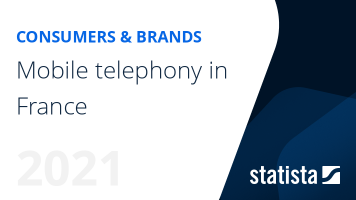 The most important key figures provide you with a compact summary of the topic of "Mobile telephony in France" and take you straight to the corresponding statistics.