Looking for directions, booking a reservation, checking up on friends — the solution is literally at your fingertips. As smartphones quickly became essential to our routine, nowadays it is almost impossible to envision our daily lives without them.
In that context, it is no surprise that the smartphone penetration in France experienced a dazzling rise between 2011 and 2018. The share of French people owning a smartphone has indeed risen from 17 to 75 percent in eight years, whereas landline telephone usage is dropping. Smartphones are gradually replacing the so-called "classic" mobile phones and are no longer the prerogative of the most privileged segments of the population or technology enthusiasts.

Manufacturers such as Apple and Samsung have managed to position themselves as key players of the smartphone sector, most notably on the high-end smartphone market. Both brands still dominate the international and the regional market until this day. In 2020, Samsung was the preferred brand among French users, as 37 percent stated to own a smartphone from the Korean manufacturer. With a market share of 24 percent, Apple came in second position that same year.

The mobile operating system market in France is largely dominated by Android, which crossed 27 million active users in 2017, corresponding with a nearly 70 percent market share. Google's operating system is by far the leading actor in the French and international, followed by Apple iOS, which amounts to 23 percent of the market in France. Windows Phone (Microsoft) and Blackberry take third and fourth place in the mobile OS market respectively.

The rise of smartphones and the arrival of a new generation of standards for mobile telecommunication (4G and then 5G) have contributed to the spread of mobile usage among the French population. The functionalities offered by smartphones and mobile Internet have profoundly changed the Internet consumption habits of French people, who no longer need a computer and a fixed Internet connection to compare prices to find the best deals or make online purchases. More and more people in France are interested in m-commerce (or mobile commerce), namely buying and selling goods and services from a mobile device. According to a study conducted in 2018, nearly 30 percent of transactions made by the French via mobile phones were worth more than 300 euros.
This text provides general information. Statista assumes no liability for the information given being complete or correct. Due to varying update cycles, statistics can display more up-to-date data than referenced in the text.

Smartphone by brand in France 2020

Smartphone by brand in France 2020 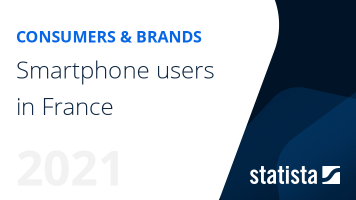 The most important key figures provide you with a compact summary of the topic of "Smartphone users in France" and take you straight to the corresponding statistics.