The Tottenham Hotspur Football Club was founded on 5th September 1882 and plays in the Premier League, which is not only the most successful football league, but also the most successful sports league worldwide. According to the Soccer Power Index as of May 2022, Tottenham is considered the ninth best football team worldwide. They have won the FA Cup a total of eight times, the last time being in 1991.

What is Tottenham worth?

As of 2021, Tottenham has an enterprise value of approximately 1.9 billion British pounds or 2.1 billion euros, which at the time is the ninth highest in all of Europe. With a total revenue of roughly 521 million euros during the last season, Tottenham is the fourth most lucrative team in the Premier League. The majority of that revenue comes from broadcasting deals with 276.7 million euros, followed by commercial deals for 151.9 million euros. Since 2014, the AIA Group is the jersey kit sponsor for Tottenham, and revenue has more than doubled in 2018 to 35 million British pounds. This is the third highest jersey kit sponsorship in the Premier League alongside Chelsea FC, the highest being Etihad and Manchester City at 67.5 million British pounds.

When it comes to stadium attendance, Tottenham places fourth highest in the Premier League, with an average of 56,523 attendees during the 2021/22 season. Match day ticket prices from a year ealier ranged from 32 British pounds as the cheapest to 81 British pounds as the most expensive. Tottenham Hotspur jerseys are among the most expensive in the League. It was estimated that due to the coronavirus (COVID-19) pandemic, Tottenham was estimated to have a total revenue loss of 83 million British pounds for the season. So far Tottenham and the rest of the Premier League have made a good comeback from COVID-19.
This text provides general information. Statista assumes no liability for the information given being complete or correct. Due to varying update cycles, statistics can display more up-to-date data than referenced in the text.
Published by Statista Research Department, May 27, 2022 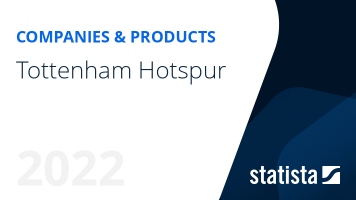 The most important key figures provide you with a compact summary of the topic of "Tottenham Hotspur" and take you straight to the corresponding statistics.