Published by Statista Research Department, Jul 30, 2021
Although it is not the most practiced physical activity in France, football remains the number one sport in the country. The French football federation is at least the one with the most licensees. This leading position on the national sports scene is a real gold mine for the French sports movement in general. The Ligue 1 alone recorded revenues of over 2.5 billion euros for the 2018/2019 season.

The media benefit most from French football. Among others, TV media generated more than 1.2 billion euros worth of revenue. The links between French football and the media do not stop there: the national TV rights of Ligue 1 have brought in more than 720 million euros, while the football economy had also created nearly 35,000 jobs in France in 2015-2016.
While the Ligue 1, nicknamed "La Ligue des Talents", has indeed attracted higher TV rights, increasing its revenues, the amount is still limited compared to the all-powerful Barclays Premier League. Focusing on clubs’ value is enough to realize that no French club can financially compete with English clubs, with the exception of Paris-Saint-Germain.

French football has a bright future ahead. With a new star on its jersey since summer 2018, the French men's team remains led by Didier Deschamps, a coach with impressive longevity, he is also the only Frenchman to have won two World Cup football tournaments. The first in 1998 as a player and captain, the second as coach in 2018. Deschamps extended his contract in December 2019 until after the 2022 World Cup.
If the present is represented by Antoine Griezmann, ranked third in the 2018 Golden Ball and new star of FC Barcelona, the future is symbolized by Kylian Mbappé. The 22-year-old world champion has already reached the 100-goal mark in his career, further proof of his talent and precocity.

The development of women's soccer

France is also contributing to the development of women's football. The 2019 World Cup organization was a superb showcase for the promotion of women's football. Fourth in the FIFA ranking at the end of the World Cup, Les Bleues have some of the best players in the world in their ranks, like the goalkeeper Sarah Bouhaddi.
At club level, Olympique Lyonnais is a real ogre on the French scene as well as on the European one. Jean-Michel Aulas' club had won its 14th French championship title in a row in the 2019/2020 season. However, the development is not as spectacular as women's soccer audiences. On average the players of Division 1 clubs earned 3,500 euros per month.

In the following 5 chapters, you will quickly find the 33 most important statistics relating to "Football in France".

The most important key figures provide you with a compact summary of the topic of "Football in France" and take you straight to the corresponding statistics. 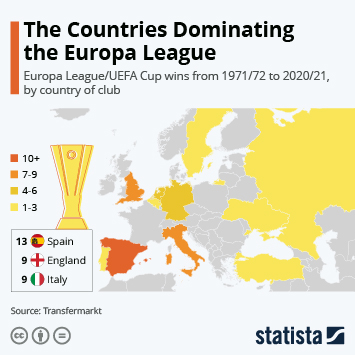