Cigarettes in the U.S. - Statistics & Facts

The United States is the second largest market for cigarettes in the world, with revenues exceeding 90 billion U.S. dollars in 2019. The United States is second only to China, much of whose market is controlled by state-owned China National Tobacco Corporation (CNTC) which controls a 44 percent share of the global cigarette market. Philip Morris International and British American Tobacco came in second and third places, each accounting for 14 percent and 12 percent global market shares, respectively.

In the United States, tobacco consumption has witnessed a sharp decline over the years. The number of cigarettes sold in the United States fell from nearly 400 billion in 2001 to about 203 billion in 2019. Interestingly, 2020 witnessed an increase in sales for the first time since 2004, although growth was a marginal 0.4 percent. In the face of dwindling sales, market leaders such as Philip Morris have managed to maintain a stable inflow of revenues, even increasing global net revenue from around 67 billion U.S. dollars in 2010 to over 76 billion U.S. dollars in 2020.

Declining cigarettes sales could, in part, be due to growing public awareness of the health risks associated with smoking, coupled with the government’s effort to curb cigarettes consumption. Indeed, cigarettes taxes were as high as 4.50 U.S. dollars per pack of cigarettes in the District of Columbia as of July 2020. Whether taxation effectively reduces tobacco consumption is an unsettled question, but what is certain is that smoking rates in the United States have decreased considerably over the years.
This text provides general information. Statista assumes no liability for the information given being complete or correct. Due to varying update cycles, statistics can display more up-to-date data than referenced in the text.
Koen van Gelder
Research expert covering Tobacco and Meal Kits
Get in touch with us now
Published by Koen van Gelder, Jan 12, 2022

Revenue of the cigarettes market in the United States
80.83bn USD

Revenue of the cigarettes market worldwide by country 2021

Volume of cigarettes sold in the United States
240.9bn sticks

Value of cigarettes imports to the United States
348.54m USD 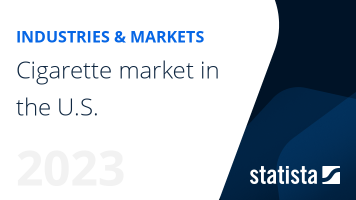 Go to report Cigarettes in the U.S.
Top Seller

The most important key figures provide you with a compact summary of the topic of "Cigarettes in the U.S." and take you straight to the corresponding statistics.