Cannabis refers to the plants Cannabis sativa, Cannabis indica and Cannabis ruderalis and the products derived from them. The plant grows naturally in many tropical and subtropical climates; however, nowadays it can be cultivated by means of indoor technologies almost everywhere in the world. The main psychoactive ingredient of cannabis is tetrahydrocannabinol, commonly known as THC.

Like in much of the world, cannabis remains federally illegal for cultivation, sale, and possession in the United States. Despite this, many states have legalized the drug for recreational use. The first states to do so were Colorado and Washington in 2012. As of 2021, 18 states plus the District of Columbia have legalized cannabis for recreational use. Every state has its own rules regarding cultivation, possession limits, and sales. Despite the COVID-19 pandemic, the market for recreational cannabis in the U.S. grew substantially in 2020. Total sales increased by over 50 percent compared to 2019 to reach 11.6 billion U.S. dollars. California is the single largest market in the U.S., worth 4.4 billion dollars in 2020 and already triple the market size of the first year of legalization. Flower and pre-rolled joints have been the predominant cannabis products since the market's inception but they are slowly loosing their position. Market share for these products has declined from 57 percent in 2017 to 46 percent in 2020. Vape and edible products have been the beneficiaries. The tax generated from recreational cannabis has been a big motivator for states to legalize sales. California gained over a billion dollars in tax revenue in 2020 and Washington generated over 600 million.

All in all, nearly one billion kilograms of recreational cannabis was consumed in the United States in 2020. This number is set to triple by 2025 as more states roll out retail selling. Despite the availability of cannabis in retail locations in legal states, most consumers say their primary source of cannabis was from friends. Almost all states (with the exception of Washington, Illinois, and New Jersey) with retail markets allow residents to grow a minimal amount of plants for their own consumption. Because modern growing techniques and plant genetics allow a large amount of buds to be harvested from a plant many home growers may end up with more than they can personally consume. Quality concerns and price have also stifled retail growth, with black markets thriving along side legal sales. For consumers who do purchase retail cannabis, most tend to purchase sporadically, once every month or two.
This text provides general information. Statista assumes no liability for the information given being complete or correct. Due to varying update cycles, statistics can display more up-to-date data than referenced in the text.
Published by Jan Conway, Feb 22, 2022 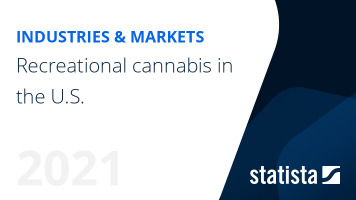 Go to report Recreational cannabis in the U.S.
Top Seller

The most important key figures provide you with a compact summary of the topic of "Recreational cannabis in the United States" and take you straight to the corresponding statistics.