South Africa is incredibly rich in natural resources, with large reserves of some of the most valuable minerals on the planet found below its surface. Industrial scale mining in South Africa began in the 1850’s with the establishment of the first copper mine. Then, in 1867, diamonds were discovered in Hopetown, and in 1870 gold was discovered. Since then, the mining industry has become hugely important to the country, contributing roughly 219.5 billion South African Rand (roughly 12.8 billion U.S. dollars) in 2021 to South Africa’s Gross Domestic Product (GDP). Furthermore, the total value of mining industry merger and acquisition transactions in South Africa reached nearly 9.2 billion U.S. dollars in 2022.

Some of the most well-known commodities produced in South Africa are precious metals such as platinum and gold. South Africa is home to the Witwatersrand Basin, which holds the world’s largest known gold reserves. Although South Africa has the second-highest gold production in Africa, it is significantly lower than other leading gold producing countries worldwide such as China and Australia. South Africa once had the greatest gold mining market share in the world, but output has declined massively since the 1970’s. Politics, high costs, and trade union action are some of the reasons for this decline, as well as a shift towards platinum group metals (PGMs).

As of 2021, South Africa was the world's largest producer platinum as well as palladium, another PGM. The platinum sector has the highest number of employees in South Africa’s mining industry, employing nearly twice the number of gold mining and coal mining employees. South African platinum exports accounted for nearly 26 percent of global exports in 2021.

Coal mining in South Africa began around the same time as gold mining and is one of the country’s most valuable commodities, accounting for 24 percent of mineral mining revenue in 2022. Proved coal reserves in South Africa amount to approximately 9.9 billion metric tons, with the largest of the country’s deposits found in the Ecca group, which covers 50 percent of South Africa’s land surface. Nearly 93,000 people were employed by coal mining in South Africa as of 2021.
This text provides general information. Statista assumes no liability for the information given being complete or correct. Due to varying update cycles, statistics can display more up-to-date data than referenced in the text.

Saifaddin Galal
Research Expert covering the economy and society on Egypt, South Africa, and Ethiopia
Get in touch with us now
Published by Saifaddin Galal, Jan 9, 2023 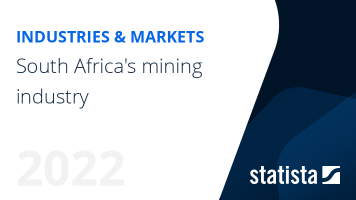 The most important key figures provide you with a compact summary of the topic of "Mining industry in South Africa" and take you straight to the corresponding statistics.