Numerous industries worldwide depend on the supply of mineral commodities from underground. The dependency of various high-tech-industries on rare earths is a recent issue – coal, on the other hand, is still one of the leading global energy resources. Consequently, the mining sector is pivotal to the world’s economy. The revenue of the top 40 global mining companies, which represent a vast majority of the whole industry, amounted to some 656 billion U.S. dollars in 2020. The net profit margin of the mining industry decreased from 25 percent in 2010 to 11 percent in 2020.

In terms of volume, the most exploited commodities worldwide are iron ore, coal, potash, and copper. China, Indonesia, and India are the largest coal producing countries. China is also the third-largest producer of iron ore. Indeed, China is becoming the top mining country for many commodities, especially for the highly demanded rare earths, of which China produced nearly 58 percent of the global production in 2020. Additionally, China is the world’s leading country in the mine production of gold.

The mining industry’s leading five companies based on market capitalization are Anglo-Australian BHP and Rio Tinto, followed by the British company Anglo America, Anglo Swiss company Glencore, and Newmont of the United States. As of May 2021, BHP had a market capitalization of 180.5 billion U.S. dollars. Measured by revenue, the top company active in mining worldwide was Glencore, generating some 142 billion U.S. dollars in 2020. However, it has to be taken into consideration that a large share of Glencore’s revenues come from commodity trading. In 2020, four of the world's ten leading mining companies based on revenue were based in the UK, while six were based in China.

The impact of the COVID-19 pandemic on the mining industry

The COVID-19 pandemic has had a noteworthy impact on the global mining industry, as with nearly every industry. Mining companies and mine employees faced mine closures in line with some countries' lockdown regulations, outbreaks of the virus at work sites, and other issues during 2020 in relation to the pandemic. The South African mining company AngloGold Ashanti, for example, had 2,261 confirmed employee cases of COVID-19, with 13 employee deaths as of March 2021. In a survey conducted on mining and metals sector decision-makers in June 2020, a 39 percent share responded that the price of copper would recover the most quickly post-COVID-19. Another 33 percent share responded that they thought the price of gold would rather be the fasted to recover. Nevertheless, as with any complex global situation, not every company or every country was impacted to a large extent. In any case, the full impact of the pandemic on the mining industry remains to be measured and understood.
This text provides general information. Statista assumes no liability for the information given being complete or correct. Due to varying update cycles, statistics can display more up-to-date data than referenced in the text.

2022 global list of leading mining companies based on revenue 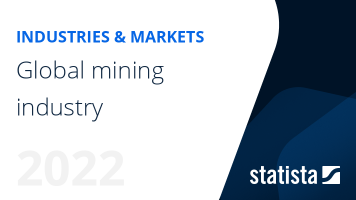 The most important key figures provide you with a compact summary of the topic of "Mining" and take you straight to the corresponding statistics.