Published by
Yihan Ma,
Mar 18, 2022
China’s beer industry has witnessed a prominent growth since early 1980’s, supported by the sheer size of the populace and favorable policies. At the beginning of the 21st century, China overtook the United States to become the world’s largest beer producer as well as the consumption market. In 2020, more than 340 million hectoliters of beer were produced in China, nearly 120 million hectoliters more than the United States ranked at second place. In 2021, China generated more than 120 billion U.S. dollar revenues from its beer industry, mostly from alcoholic beer.

The beer brewing industry in China

Beer production enjoyed a long history in China. Archaeological records show that ancient Chinese brewed beer-type alcoholic drinks 9,000 years ago. Modern beer brewing technologies were brought to China by western imperialists in the early 20th century. In 1903, the German-English joint company, Anglo-German Brewery, founded the Germania-Brauerei (Germania Brewery) in Qingdao, which later became one of the largest beer brewing companies Tsingtao Brewery in China. The beer industry in China is highly concentrated, with the five leading players occupying more than 90 percent of the market. Three of the ten major global beer companies were from China, namely China Resources Breweries, Tsingtao Brewery, and Yanjing.

Even though China remained the world’s largest beer producer, the beer production volume in China saw a continuous decrease after peaking in 2013. On the one hand, the number of beer brewing enterprises in China shrank significantly in the past years due to the high competition. On the other hand, major beer breweries’ productive capacity utilization rates remained low, resulting from a saturated market.

China’s beer market has recorded strong growth in terms of revenue since 2013, though the annual retail sales volume stalled at around 45 million kiloliters. While the consumption of lower-end beer decreased, more and more beer consumers in China chose to shop for premium beer. The market share of higher-end beer has leaped from merely two percent in 2009 to 11 percent in 2019 and yet foresee further growth in the following years. Craft beer, one of the most popular higher-end beers, entered China in the late 2000s and witnessed unprecedented growth in recent years. In 2020, the consumption volume of craft beer in China totaled 830 million liters and was yet expected to triple by 2025.

Though offline retail channels such as restaurants and supermarkets still took up the absolute majority of the beer sales in China, the outbreak of the coronavirus pandemic boosted China’s online beer retail. In 2020, e-commerce platforms contributed to more than 11 percent of the total beer sales in China.

In the following 5 chapters, you will quickly find the 25 most important statistics relating to "Beer industry in China". 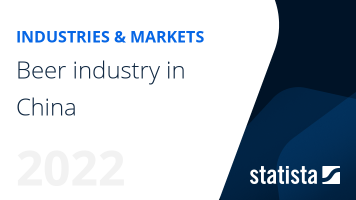 The most important key figures provide you with a compact summary of the topic of "Beer industry in China" and take you straight to the corresponding statistics.